This is a description of how I created a custom Vagrant box starting from a Lubuntu 14.04 desktop CD.

This post is based on the instructions that were published by Angel Ruiz in his article Steps to create a Vagrant Base Box with Ubuntu 14.04 Desktop (GUI) and VirtualBox. By publishing my version here, it is easier for me to reproduce this if I want to create a new version.

I’m assuming that VirtualBox and Vagrant are already installed.

First I downloaded the correct ISO, in this case “Lubuntu 14.04.1 Desktop AMD64”, and used this to create a new virtual machine in VirtualBox. During the installation process I made sure that the user name is “vagrant”.

After the installation was done and I rebooted, I made sure the system was up-to-date. To save some disk space, I removed the original kernel (3.13.0-32) and rebooted so the updated kernel was used (3.13.0-43).

A basic setup is needed for Vagrant to function.

This allowed me to add this line:

Back to the vagrant user.

Vagrant needs to be able to SSH into the machine. So I installed an SSH server.

By default the SSH server runs on port 22 and allows login with a public key (due to the line “PubkeyAuthentication yes” in /etc/ssh/sshd_config). So I did not have to change anything there.

I added the Vagrant SSH keypair to the authorised keys of the vagrant user.

To use shared folders I needed to install the Guest Additions. But first a bit of preparation was needed.

Now I could install the Guest Additions. 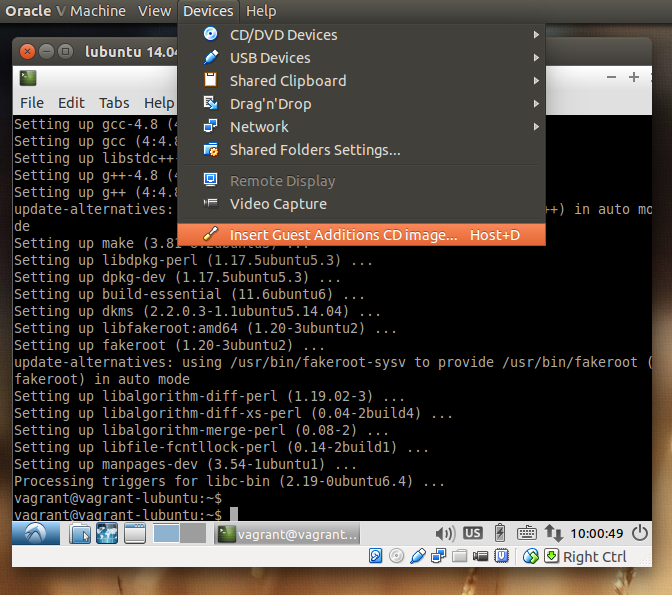 After mounting the ISO, I manually started the installation.

Since I’ll be configuring the Vagrant boxes using Puppet, I also installed Puppet.

To make the image a little smaller, I removed a couple of packages I usually won’t need anyway.

There were probably more packages I could have removed to get to a minimum, but this was enough for me.

To get a list of the installed packages and their size, I used this command (thanks to user “raspi” over at commandlinefu.com):

Next item on the list: reduce the size of the .vdi file by making sure all the free space only has zeros and then compacting the file.

Although you can argue whether the current virtual machine is a “bare minimum required for Vagrant”, it’ll do for my purposes. So it was time to package it.

Since this is a box where I’ll want the GUI by default, I created a Vagrantfile:

(By including this file in the box, see the next command, this little piece of configuration is loaded when the box is used. It will be first in the load order.)

Then I executed the following commands:

The first command creates a package.box file from the virtual machine called “lubuntu 14.04 desktop amd64”. This file is then used in the second command. The new base box “lubuntu-14.04-desktop-amd64” is now available for use.

To use the custom base box, you have to initialise a Vagrant environment by creating an initial Vagrantfile, just as normal. 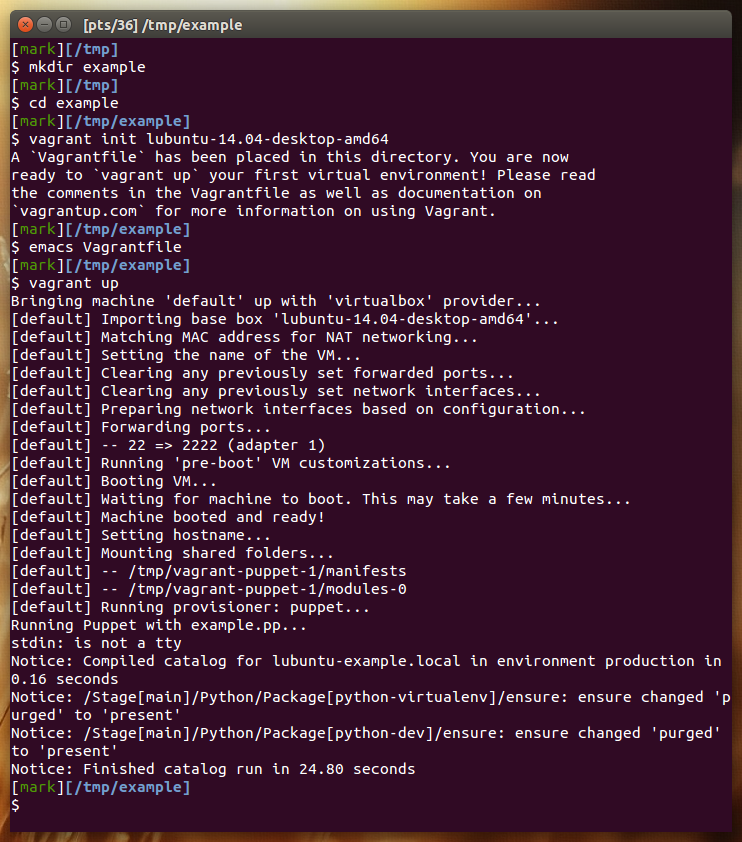 (Note that I edited the final Vagrantfile in the project directory to use the Puppet provisioner. But that is beyond the scope of this article.)

As I stated earlier, this is mostly a mix of information that is already online elsewhere, e.g.:

Apparently this problem with shared folders is a known issue. It should be solved in version 4.3.12, but Ubuntu 14.04 ships with VirtualBox version 4.3.10. And unfortunately the workaround listed in the issue (creating a symlink) did not work for me.

For me the easiest solution seemed to be to add a new package repository to my host machine (see the page Download VirtualBox for Linux Hosts) and install the virtualbox-4.3 package, which provides version 4.3.20 (at the time of writing). After creating a new base box with this version of VirtualBox, Vagrant could mount the shared folders properly.