My browser of choice has been Chromium for quite a while now. A couple of podcasts recently discussed how Chrome has become a memory hog and how Firefox has improved over the years. Time for an experiment.

Before I started using Chrome (and later Chromium), Firefox was my favourite browser. Chrome offered a separate process per tab and nice developer tools. And it was—or at least felt—faster. But that was a couple of years ago and since I heard about other people switching back to Firefox, I also wanted to give it a chance again.

For the record, I am comparing Firefox 36 with Chromium 41 here, both running on Ubuntu 14.04 (Trusty Tahr).

In my opinion there’s only one way to properly do this experiment: use Firefox exclusively and not even start Chromium. And that was exactly what I did for a week. (Well… almost, but I’ll get back to that later.)

My first actions were to import my bookmarks and history from Chromium to Firefox. This helped me to feel at home straight away. Next up were a few add-ons: Adblock Plus, Firebug, NoScript and Privacy Badger. Time to get some actual work done.

There were a couple of things I really liked when using Firefox.

For instance, the developer tools that ship with Firefox include a Responsive Design View1 which makes it easy to test a site on different resolutions without having to resize your browser window each time. 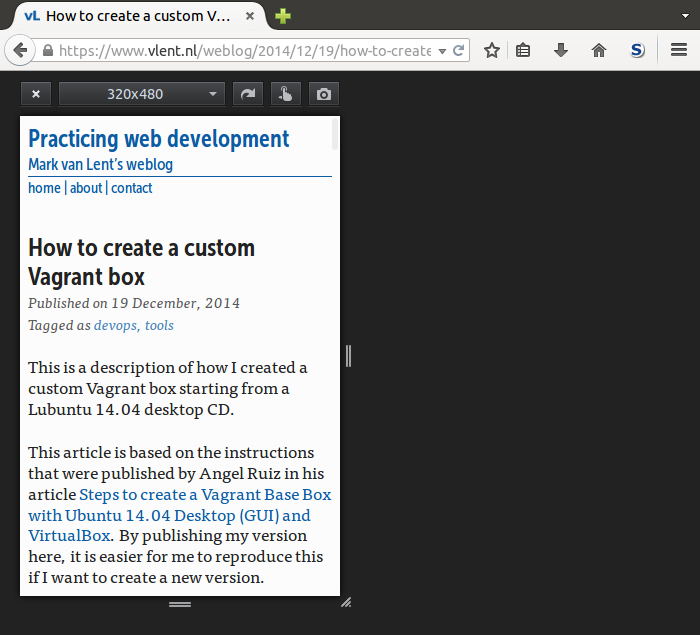 Speaking of which, the built in tools have improved quite a bit since the last time I professionally used Firefox. Unfortunately I found out about this a bit late, but I think I could have done my work perfectly without using the Firebug add-on.

During the week I also enjoyed the NoScript add-on: simple to use yet so powerful. Although I have to admit that I had a couple of occasions where I wondered why something did not work as expected and 99% of the time it was because of blocked JavaScript.

As a bonus of this experiment I caught a problem in the project I am working on. I was reviewing a change on a page and something did not seem to work. After firing up Chromium (the only time I ‘cheated’) I discovered that this problem only existed on Firefox.

There were also a few things I noticed during my work week that I did not like.

I really disliked the way the tabs worked for instance. If you’ve got too many of them, they start to scroll. Using the Tab Mix Plus add-on I could get Firefox to at least show me all tabs again, but I did not really fancy the multi-row tabs.

Compare this with Chromium where the tabs can become so small that they are almost impractical, but at least I’ve got a sense where a tab is relative to the first and last tab I opened.

A final thing that I will mention is that Firefox was not as fast as Chromium. First and foremost because Firefox seemed to ‘pause’ more frequently than Chromium. That is, the window went grey and was unresponsive for a couple of seconds.

Related to this, at least from an end users point of view: (some) sites loaded slower. Some hardly noticeable (e.g. this site took 400ms in Chromium and 500ms in Firefox), others were more obvious and annoying like loading a patch set in our code review tool took 1.21s in Chromium and 2.65s in Firefox.

I went into this experiment with an open mind, completely intended to make Firefox my default browser if I liked it better than Chromium. After having used it for a week I can agree that Firefox is a better browser than it was a couple of years ago.

But although Firefox brought me good things, it also failed to convince me at the moment. I might use it a bit more often now, but my default and main browser will remain Chromium for now.