These are the notes I took on the first conference day of DevOpsDays Amsterdam 2017.

Kris walks us through the beginning of DevOpsDays.

The idea for DevOpsDays started in 2007 in the Antwerp Zoo. Imagine a Venn diagram with three circles: open source, agile and “cloudy stuff.” DevOps is where the tree circles overlap. 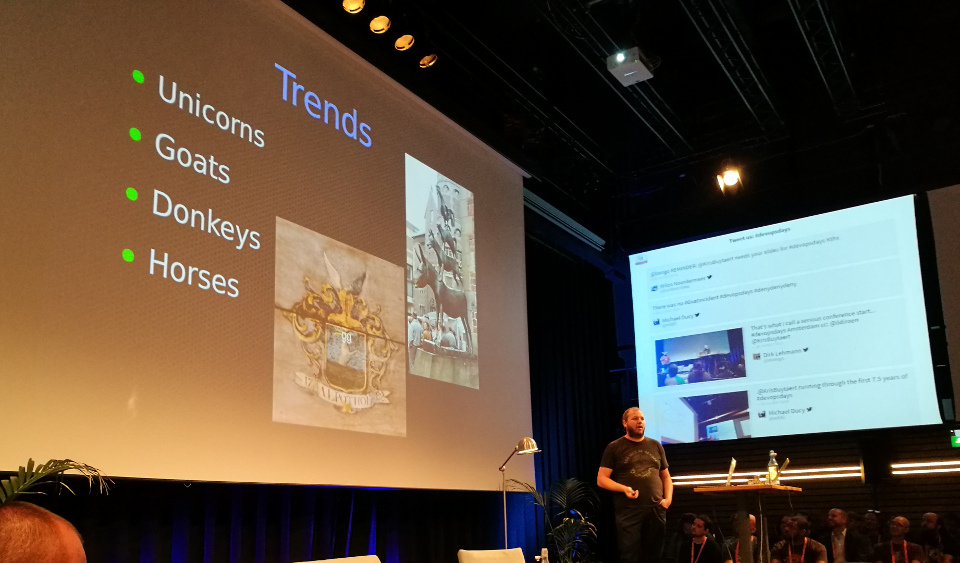 Although the open space topics have become predictable, there is an evolution in topics like culture, automation, monitoring.

Important takeaway: tools will not fix your broken culture. The tooling hype is not helping. Stop looking at the hype and start thinking about what matters: how can we help the business go forward?

According to research, after 10 years in the industry (‘mid career’), 56% of the women left have the industry.

There are six causes for burnout identified by Dr. Christina Maslach: disconnection of workload, control, rewards, fairness, values or community. Ryn adds “disconnection of the industry itself” to that list. Some possible causes: being the only women in ops, being the only ops engineer in a company. In general: feeling like being “the only one.”

Breaking down silos is not only good for companies but also for people. 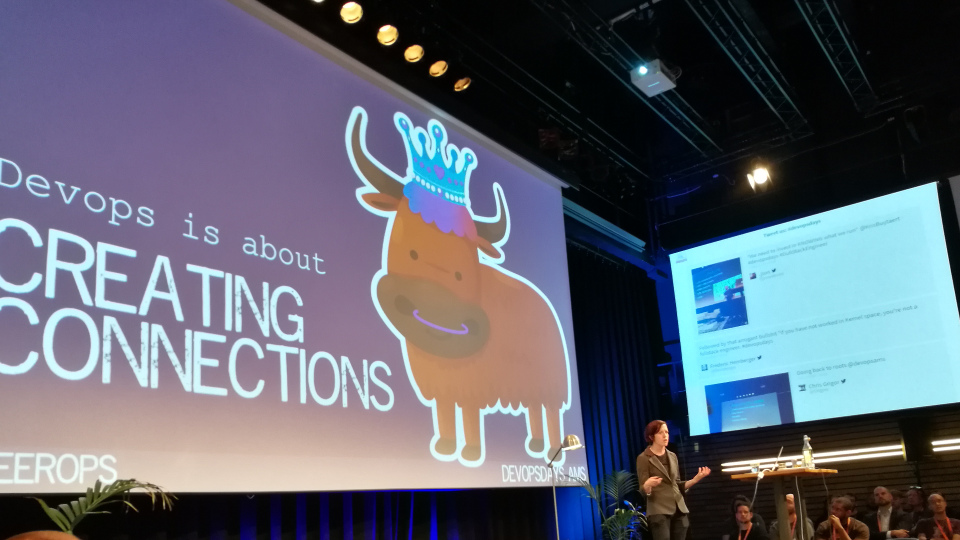 The four pillars all help with creating connections. But here comes the same quote again:

Tools will not fix a broken culture.

A couple of the things that worked for Etsy to create connections:

We do not want to separate the engineers from the non-engineers. We want to have connections throughout the entire organisation. Ideas to connect the entire business (and not just developers and operations people):

Create connections by working on an inclusive industry. We do not want people to feel excluded and get out of the industry because of it.

Empathy allows people to help each other create the most inclusive industry on behalf of everyone working in it.

We can use differences to enhance creativity. But how do different opinions actually get treated?

Technology is a means to an end. Solving problems for people is the end goal.

DevOps uses empathy to create and enhance connections between us.

This talk is about how Skyscanner attempts to create a start-up culture with lots and lots of engineers.

Skyscanner is a Scottish company with more than 800 employees and over 50 nationalities. 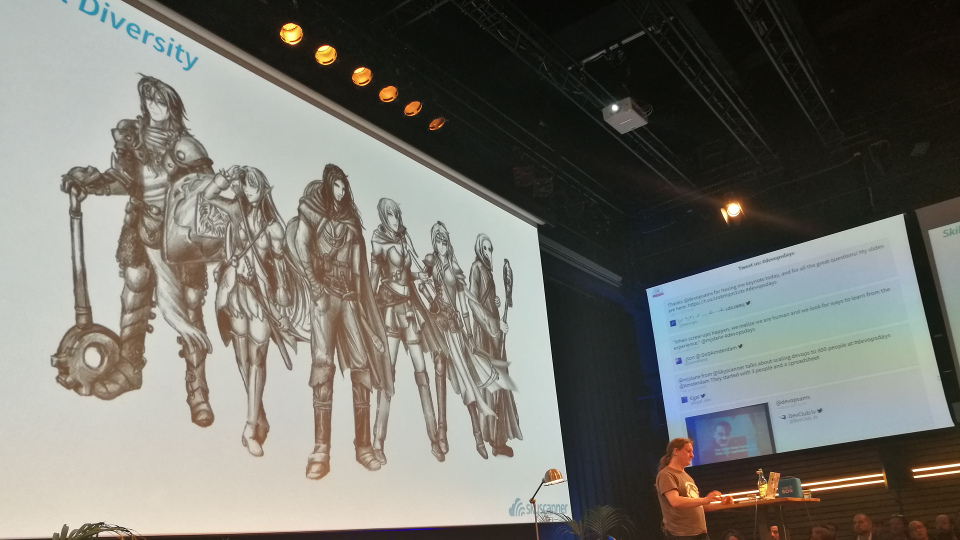 Previously they were on a 6 week release cycle. Feature squads worked on a feature and then moved on to the next feature, basically leaving the newly written code to rot.

Skyscanner first had to stop to be able to go faster: fix bugs, get a stable product. They started using the theory of constraints (introduced by Eliyahu Goldratt in the book The Goal) as a tool to get to the best flow.

Skyscanner changed the organisation to the Spotify model which means the engineers are organised in squads: small teams that own a small number of products. Squads are loosely coupled.

The right balance between business alignment and autonomy needed is needed. Both the squad members and the business have to be happy. Squads have autonomy, but they also have the responsibility to align with the business. This requires trust.

It takes time to get it right:

What has changed for Skyscanner:

Ilkka figures out software supply chain problems. How to deal with open source artefacts? He is a software developer, not security guy. He has been giving these kind of talks for a while now, and this feels like the first year that the industry is taking notice of DevSecOps.

Software is moving into parts of our lives that it has not been before. At the same time: developers outnumber application security people in a 100 to 1 ratio.

Most effect is had in building defensible infrastructure. Where would you rather be during a zombie apocalypse? A castle or a shed which has security measures bolted on? 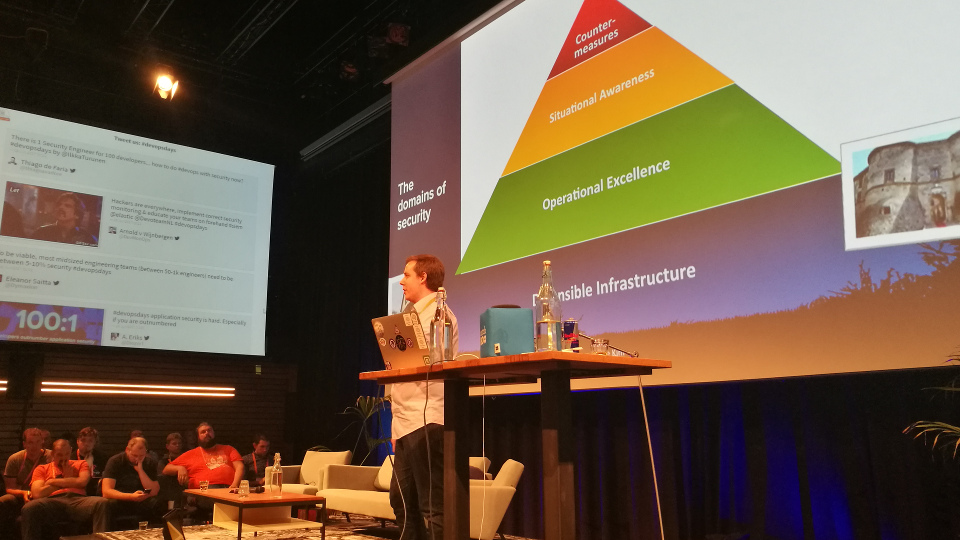 However, in our industry we are on the opposite side. We spend quite a bit on countermeasures instead of going back to the basics and building a safe infrastructure.

About 80 to 90% of typical applications is composed of components like Docker, npm, etc. An average application consists of 106 components (based on a survey of 25000 applications).

Of the 1300 companies that were interviewed, 1 in 5 had or suspected a breach related to an open source component. Developers spend little time in determining if a component they (want to) use is actually secure.

Security needs to be a part of everyday application development and delivery. Find tools that fit early on in the pipeline and give developers feedback as soon as possible.

We are not like our platforms: we are not immutable or highly available and we are ephemeral. This talk is about people.

Resilience is the ability to recover quickly from difficulties. We rarely talk about resilience of people, only about our infrastructure (load balancers, etc.). You cannot upgrade a person overnight. Change takes time and often it will take a toll on the individual.

This isn’t a talk about “what is wrong with you” but how we can help ourselves and others to become more resilient.

On the first day of her first job, Hannah and other new hires were told about the “well of despair” and that it is a normal phenomenon. This made it possible for them to talk about it with others.

When you are just out of the well of despair because of change X, then next change is already going on and you might end up in the well again. The rate of change of technology outpaces the human ability to adapt. This does not help.

However, resilience can be improved—it is not a trait you have or not. It’s a set of skills you can improve and enhance.

The locus of control is the degree to which you believe you have influence on the outcome of a situation by hard work and decisions. Increasing this, increases resilience. 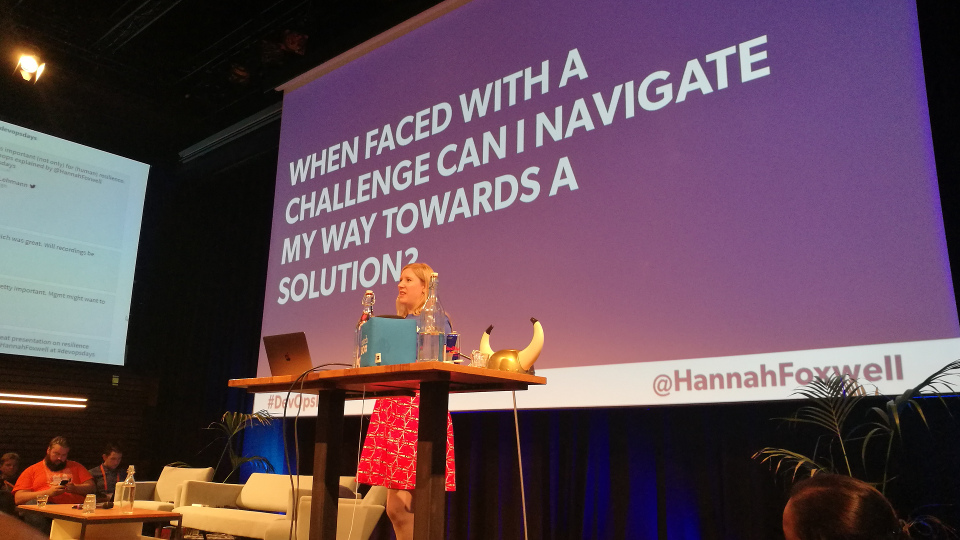 How to improve your own resilience:

If it doesn’t challenge you, it won’t change you.

Adopt learning behaviours, build on your resilience. Include aspects like how we feel about our work into your retrospectives.

This talk is not just about CLIs, but all things that let you break stuff easily. It’s also not just about production environments, but all places where breaking things is really bad (e.g. your Docker registry).

Commonalities: things going wrong during crisis because of running ‘arbitrary’ code in production. 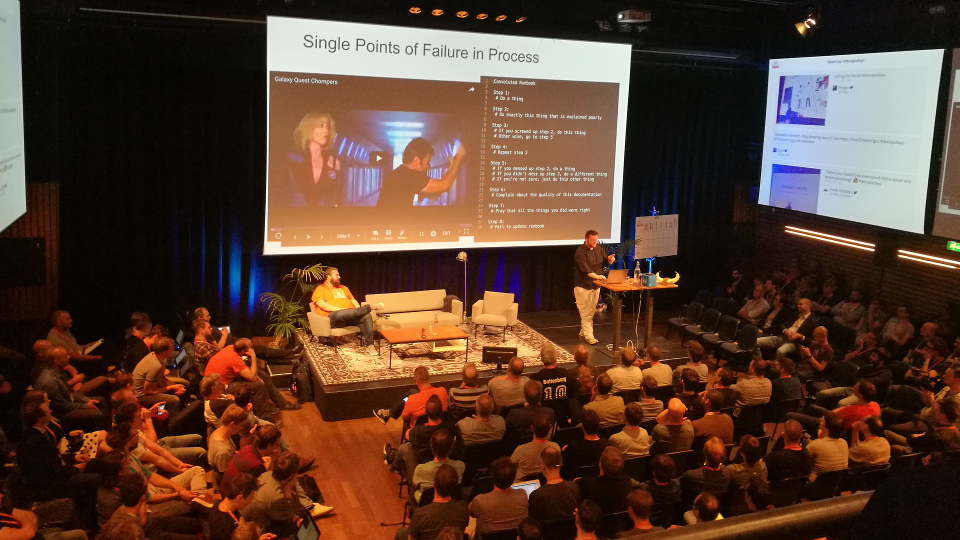 Code is safe(r). By moving to operations as code or crisis response as code, things that impact production are safe.

Based on the output, we can put the change in production. Or not.

The concept of ignites: the speaker provides twenty slides and a new slide is shown automatically every 15 seconds.

Integrating security into your devops: use a security automation pipeline — Jeroen Willemsen (Xebia)

A security pipeline can:

Tools you can consider:

DevOps is like stamppot: you take what you’ve got, mash it together and go with it. However, DevOps is an iterative process: you can replace the parts that don’t work with other parts.

For developers it’s scary to be on-call. However: people just want to be able to reach you, just in case. You don’t have to know everything. You only have to be helpful and be there.

How to make good and difficult decisions — Bernd Erk (Netways)

On average we make 35000 decisions a day. To get an idea: food is good for over 200 decisions per day. There are easy and hard decisions. Hard choices are hard because there is no ‘best’ option. 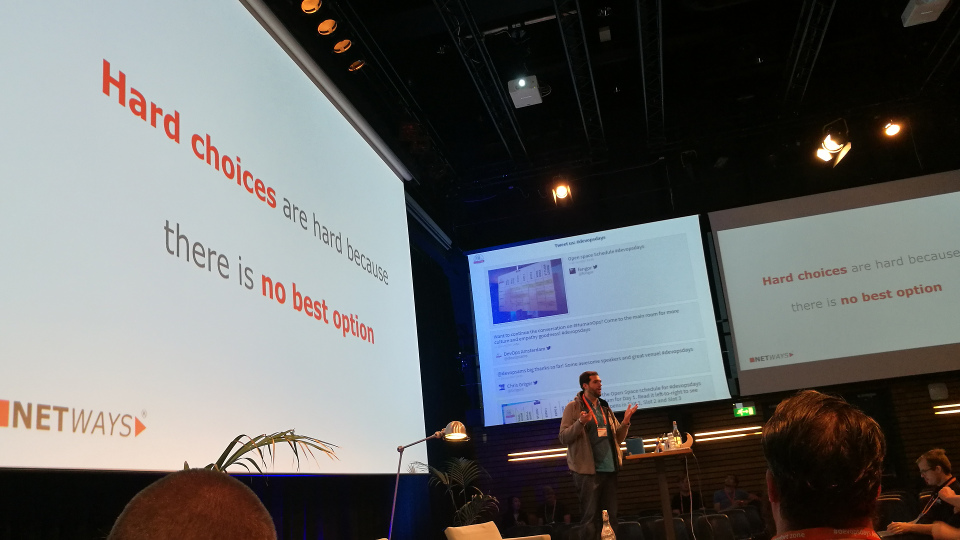 There are several forms of biases. Possible solutions to overcome these:

Hard decisions are chances to decide what we want to be.

Tip to avoid group thinking when making decisions in a group: each person writes his/her idea down and have a discussion afterwards.

How to do HumanOps — David Mytton (Server Density)

Server Density started a “HumanOps” community last year. HumanOps is the idea to think about the human side of your organisation. 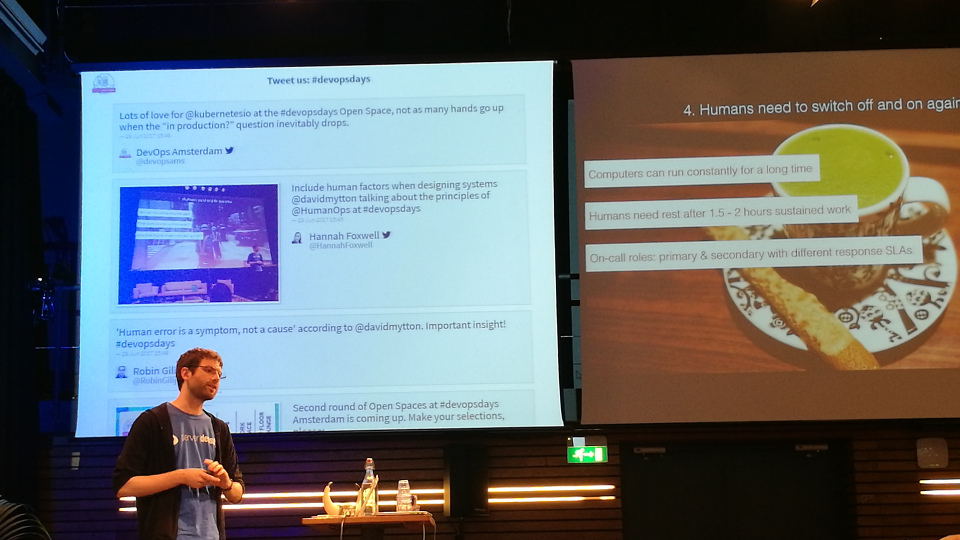 Jonathan, as a new(ish) developer at bol.com, had to respond to problems in the system. This resulted in him asking a lot of ‘dumb’ questions. He would have liked to have a runbook to know what to do when there were problems.

Two years ago, bol.com went from having big releases every month to smaller chunks going into production. Now all teams can deploy what and when they want (obviously after testing them).

They have the philosophy “you build it, you run it, you love it (and take care of it).” This requires a lot of knowledge of the systems your services are running on/with. 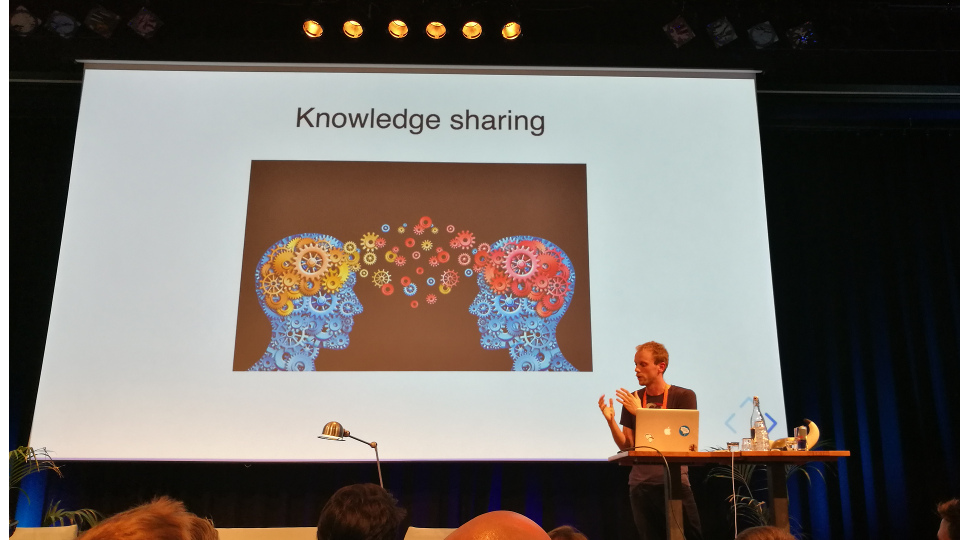 They created a guide to diagnose the problem. It had items like:

A tip for ops to help with sharing knowledge with developers: document new things not just from one silo, but share from the get-go. Involve dev teams from the start.