These are the notes I took on the second conference day of DevOpsDays Amsterdam 2017.

Adapt or Die: how DevOps can (and should!) save the world — Jody Wolfborn (Chef Software)

By practising DevOps principles, you can save the world (and not just our own sanity).

Jody has her own definition of DevOps which includes that it is an ideology, it focuses on how we build and how we operate and it is about diversity of skills, knowledge and experience. In a DevOps context, diversity can be defined as “a rainbow array of skills, ideas, tools, experiences, backgrounds, and knowledge.”

DevOps is about adding value to a system so that the system generates value back.

What does this have to do with the world? The above symptoms can be mapped to real world problems. 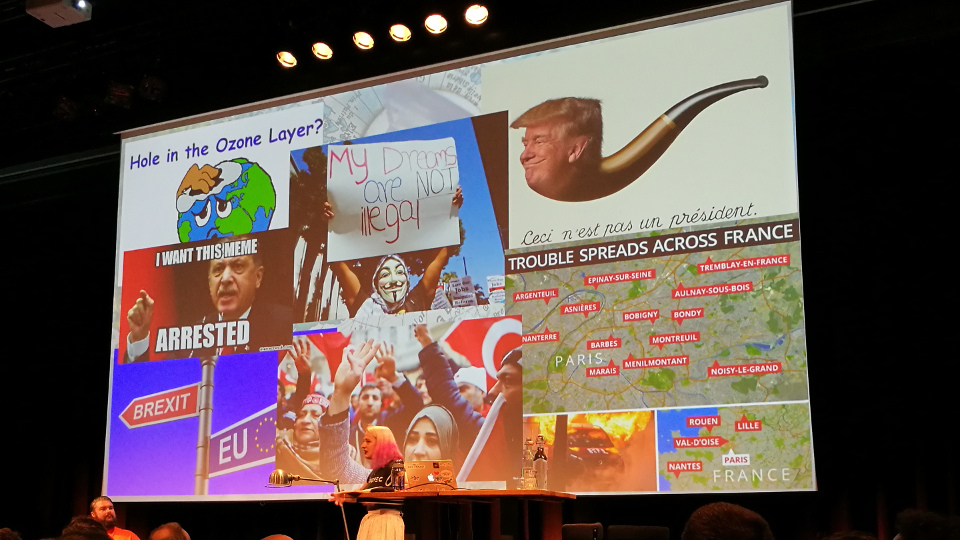 How to apply the DevOps main ideas in real world:

You can implement DevOps practices without the business or system knowing what DevOps is. Feed your knowledge and experience back into the system and help others by doing so.

This talk is a collection of lessons Zane learned when working as head of security at Etsy. 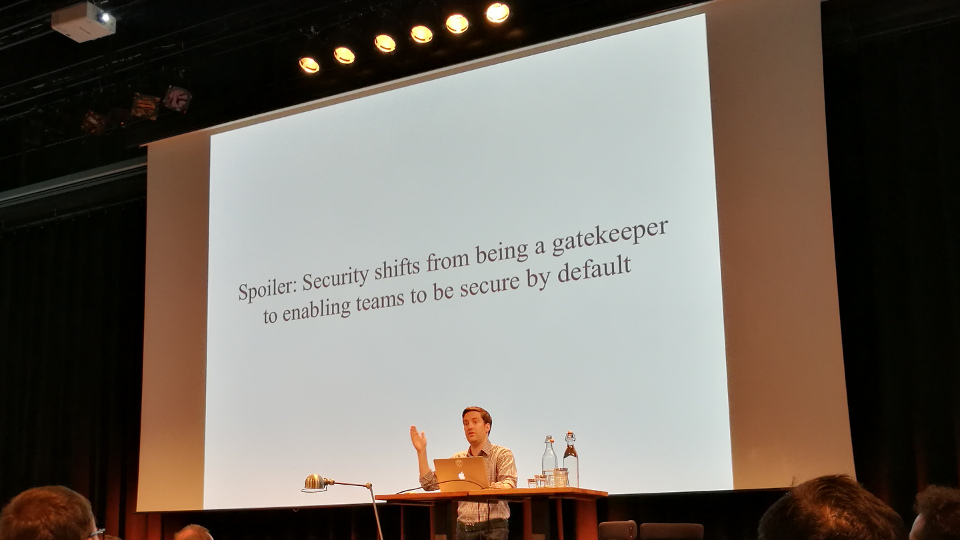 Realities in the modern DevSecOps world:

Security can not be “outsourced” to the security team, it has to be baked into the development/DevOps process.

This talk focused on a couple of them and compared the “legacy” approach with the modern take on them.

Static analysis has traditionally (in a waterfall model) been done as heavyweight, top-down process. This resulted in massive reports with mostly false positives and spending a long time on tuning and configuration.

We can adapt this by going bottom-up:

Pro tip: start with the easiest thing to implement and go from there.

Do not block changes, but for instance let developers know that a certain change will notify these 4 senior persons in the organisation. In a crisis situation that may be okay (because those persons will also be in the same room to solve the crisis) but it might also result in the developer thinking about it some more an deciding to go with a different solution. Either way: security does not get in the way.

Dynamic scanning was used to meet the baseline of discovering vulnerabilities. Too little bang for the buck when used with modern applications. However, you can modify it to ensure that security policies are enforced (e.g check that the TLS configuration only supports strong ciphers, check for Content-Security-Policy or X-Frame-Options headers). It can also function as an additional control on regression test, for instance by having a scanner hit the search box with a known XSS payload.

The legacy approach for Security visibility: collect logs, service and outage reports and keep each source of information isolated between groups. Modern approach: break down silos to give everyone access to security related information in real time.

Example: if you get a lot of HTTP 500 errors, you might want to investigate what change in your code could have caused them. But if you can combine those error logs with metrics about SQL injection logs, you might discover that the errors are related to attacks, not a change in the code.

Feedback is typically done as annual pentests. That only tells you if you have bugs. This used to be real-time enough with 1 or 2 release per year.

A modern way to do this is to combine a bug bounty with a pentest. A bug bounty is not a replacement, but an augmentation though! Bounties are good for broad, continuous feedback. As a result your pentest can be focused and deep.

When you have bug bounty projects: collect information on what is going on. What are persons trying? What vulnerabilities get found but never reported?

A success story of this approach: someone found an issue at Etsy but didn’t get around reporting it. When he wanted to make a write-up he discovered that Etsy had already fixed the problem. (See Etsy has been one of the best companies I’ve reported holes to for more information.)

Modern security approach is a combination of continuous feedback and visibility.

You have to be able to answer the question “how do I know when my attackers are being successful?”

Treat every benign bug report/outage as if it was an incident. Learn from these exercises.

Modern application security is about shifting from having a (heavy) process to guard bugs from ever reaching production (which is an impossible goal) to having a focus on continuous visibility and feedback, and providing capabilities to make developers/DevOps teams security self sufficient.

The words “post mortem” have a negative connotation. Jason removed it from the title and replaced it with “incident reviews”, which is more neutral. 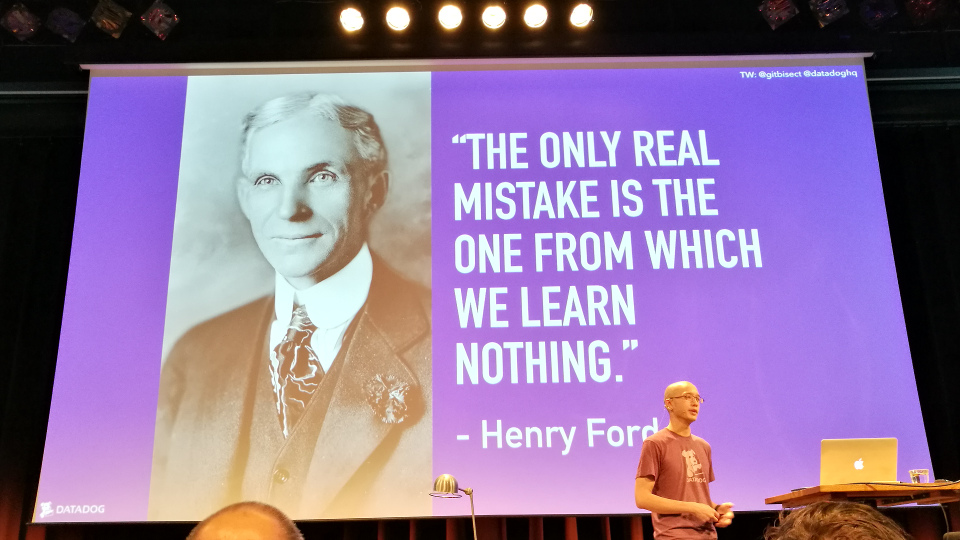 Collecting data is cheap; not having it when you need can be expensive.

Three types of data you should collect:

Who are collecting data?

What data do you collect?

When writing things down, don’t forget to include pictures. Don’t just write “we saw a spike in latency” but include a screenshot of the graph.

When do you collect data? As soon as possible, because:

Datadog emails the post mortems company wide (which means that for instance marketing/sales may be able to use it when they contact (potential) customers.) At Datadog they also schedule a monthly recurring post mortem meeting (time to learn from each other plus sets the expectation that they care about improving).

The Datadog post mortem template consists of the following items:

Talking in a war room is great, but there is no archive. Being able to use a chat archive after an outage can be useful for the post mortem. You can also use it to create reminders for yourself to address later.

The concept of ignites: the speaker provides twenty slides and a new slide is shown automatically every 15 seconds.

A customer wanted a SaaS version of TOPdesk. The initial though: we just deploy the on premise solution. However, this wasn’t as easy as they thought. As a result, they put a developer next to an ops person to improve the situation.

To get to continuous deployment, you have to cross three chasms:

At TOPdesk they created tooling to influence people and culture. They visualised the pipeline to make it clear for developers that stuff ends up on the production environment. As a result, development realised that they have to talk to operations. This (largely) took down the wall between the teams. Joep hopes that in the future it will completely crumble down.

Modern IT systems are complex and moving quite fast. Code bases look like organised chaos. It is hard to find out what went wrong and hard to find the right level of documentation:

How can we reduce response time by improving documentation?

Arnab created a shell script to test the code vs documentation ratio. This fails the build if there is not enough documentation. See his GitHub repo at arnabsinha4u/in-line-code-documentation-demo

There is a separation between the business and IT. Devs want specs and don’t want/need the reason the business wants a feature. Business are too busy to work with the team and explain the “why.”

Developers need to learn the “why” of the company, because this is needed to keep the company alive.

DevOps is about breaking the wall between Dev and Ops. However, there is still a wall between the business and IT. We need to remove that wall, because business is IT. 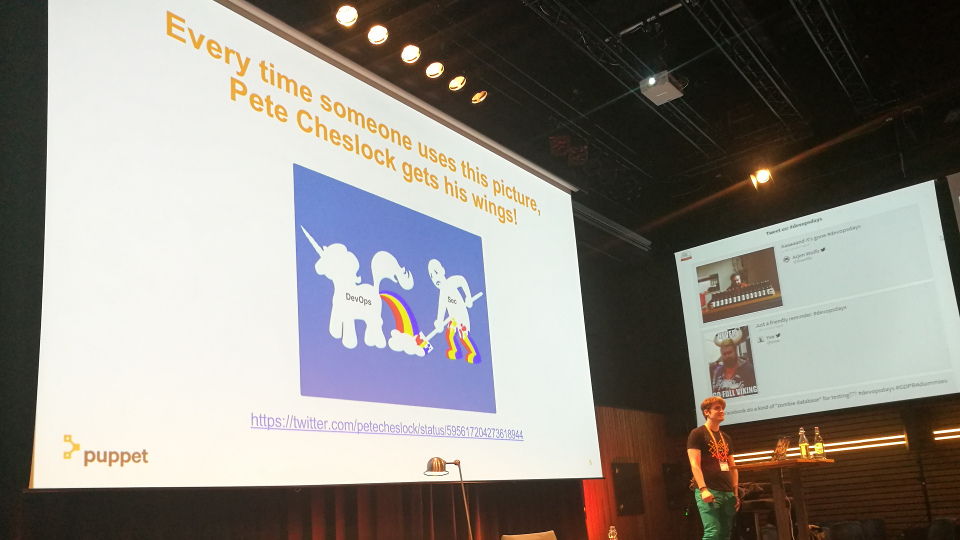 What defines secrets in infrastructure as code?

It is important to remove plain text secrets from your code (this include tests in build pipelines).

Tools mentioned to search for secrets in your code:

Note that it’s not just the code that can leak secrets, commit messages can also reveal information!

Once you have found all secrets, you will have to replace the plain text versions with encrypted versions. Tools you can use:

Good summary: Turtles All The Way Down: Storing Secrets in the Cloud and in the Data Center.

Have a procedure for when secrets are leaked. There is no silver bullet to detect leaked secrets! Tips:

The idea is that you see how much damage the “attacker” can do. And how long it takes before it is detected? (Is it detected?)

The slides contain a bunch of interesting links on the last page.