These are my notes of my first day at DockerCon.

Where I usually try to make summaries of conference talks I attend, I’ve only made notes for this conference. Most, if not all, talks have been recorded as far as I know, so you should be able to watch them to place the notes into context.

In the context of “MTA” (modernize traditional applications) we saw a demo of how easy it is to convert legacy applications with the Docker application converter (dac). In the demo they showed how the tool can generate a Dockerfile from a tarball of a Java application.

Not everyone is using Swarm. Unfortunately, using a different orchestration tool means that you do not have the seamless integration that Swarm has. However, the next version of Docker will have native integration for both Swarm and Kubernetes.1 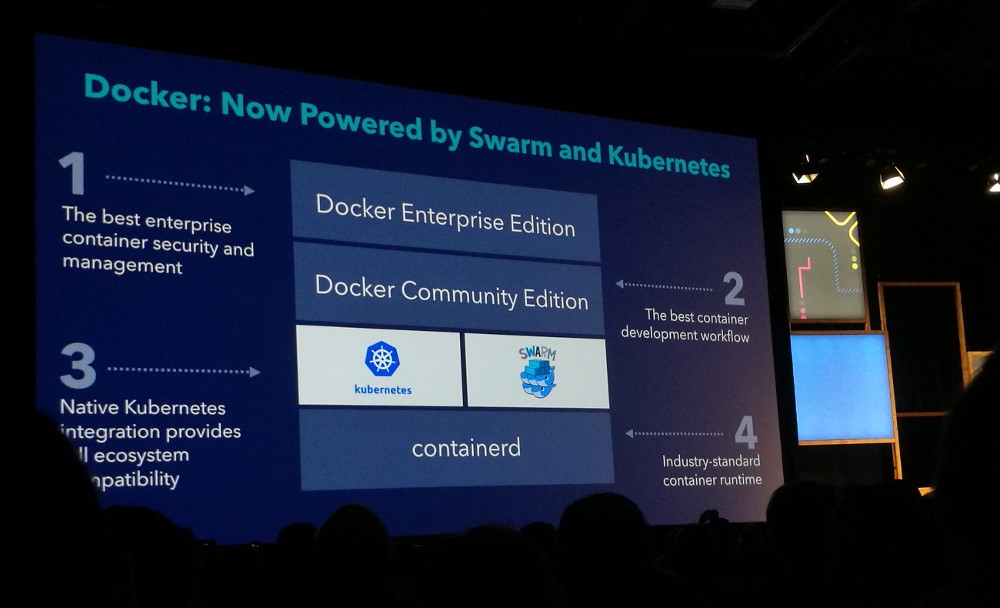 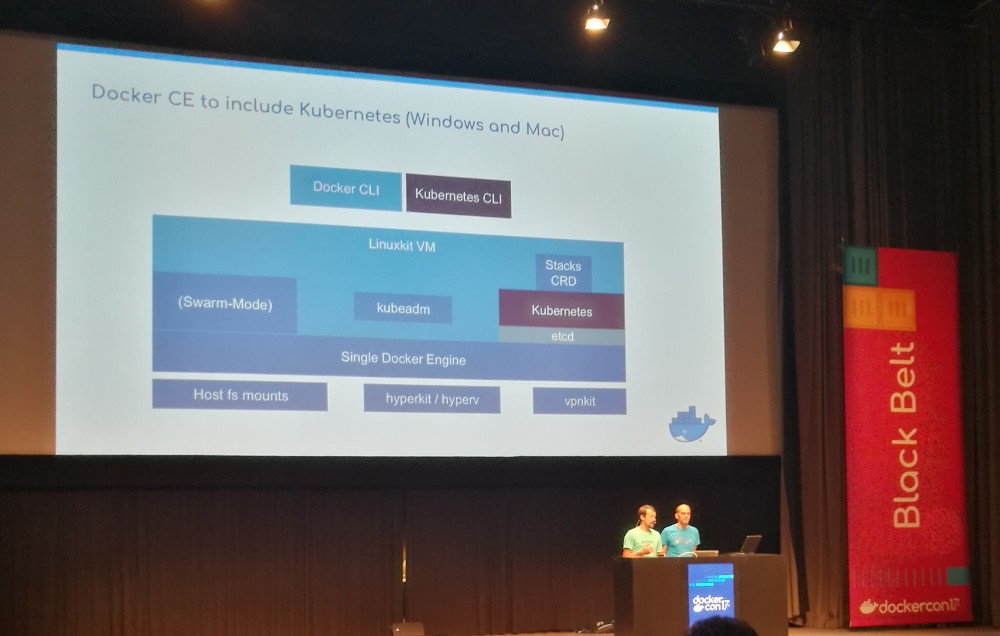 A container is ephemeral and you don’t need to protect it. You want to protect the application/service instead.

SELinux is very powerful, but difficult to master. And thus people often turn it off. To avoid users turning off or circumventing security measures, one should reduce friction.

Forensics on containers is difficult, for instance because containers may only live for a few minutes.

To build a security framework, you need to: 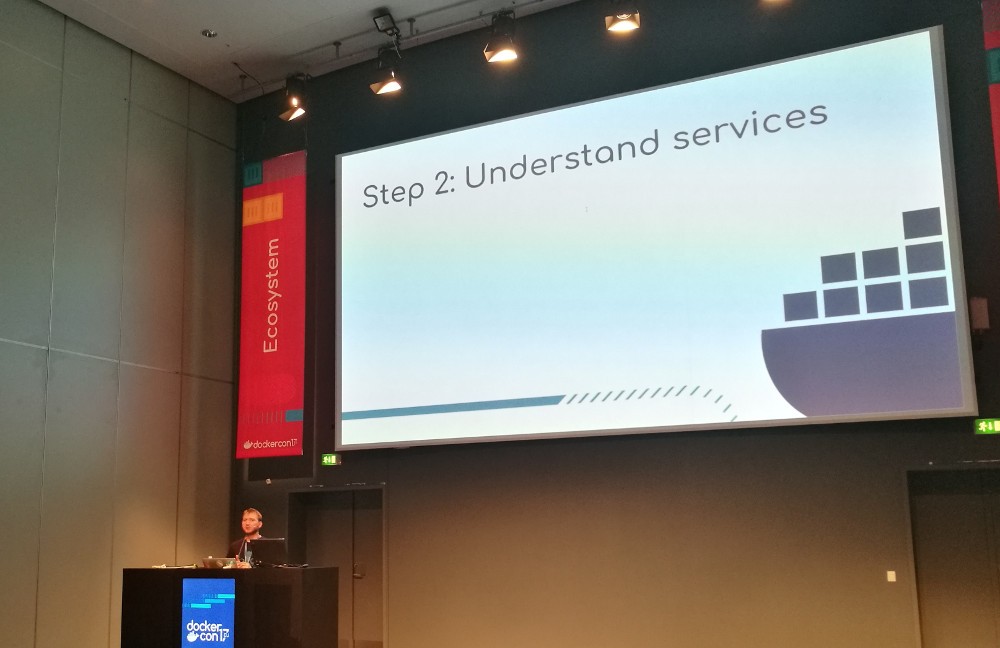 Gianluca demonstrated that Falco can detect e.g. network activity performed by known binaries that are not supposed to send or receive data over the network.

Sysdig maintains a ruleset for Falco. They update it weekly. They are also experimenting with automatic ruleset creation based on normal behaviour of a container.

Sysdig Secure: A new product to provide run-time security for containers. You can define policies when to trigger an event. You can also store Sysdig captures so that you can see what happened before the event triggered.

Sysdig has a low overhead (different from strace). It is meant to run 24/7 on production systems.

There was a contest to create the smallest Docker container that printed out “Hello world”. The result was an image of only 64 kilobyte.

Security is about more than just isolation. For instance: where did the images come from, are they up to date, how do you deal with sensitive data and/or passwords?

Docker for AWS and Docker for Azure have integration for those platforms. They offer more than installing standard Docker on an EC2 instance.

When you start integrating Docker into your environment, don’t forget to change your processes. Think about your backup and recovery strategies, et cetera.

Mike encourages us to share our knowledge, and our missteps.

This is a talk about disk space.

To prevent cache misses, put all static stuff first (labels, etc). You really want to make sure that you use the cache as much as possible.

Read the documentation about the build cache.

Pick your base images wisely. You can go for a minimal OS, but there are also reasons for wanting a full base OS:

(Note to self: have a look at the ONBUILD command.)

Security means a state of being free from danger or threat. But as soon as we connect something to a network, we are exposing it to threats. So it would be better to talk about “safety” since that is about being protected from or unlikely to cause danger, risk or injury. 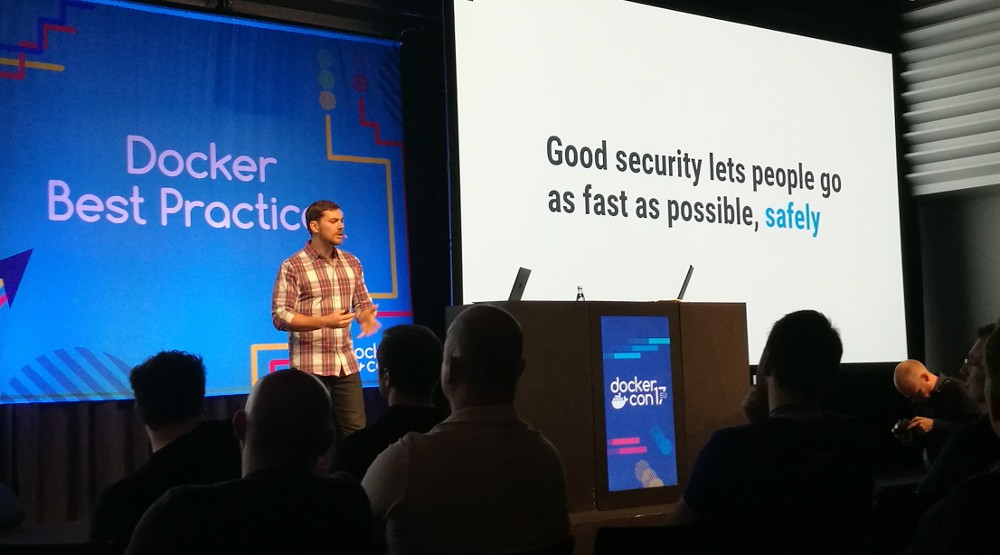 In racing, two categories of measures are taken: before the crash and after/during the crash.

If we translate the pre-crash measures to our world, we’d get something like this:

Access to the data should not just be secure, but also safe. With careful engineering you can be fast and safe at the same time.