My notes taken on the third and final day of the 2018 edition of the Open Source Summit Europe.

These are just notes. They are not proper summaries of the talks.

The dates for the Open Source Summit next year:

Advantages of using plain text for documentation, instead of e.g. Word, are that plain text is more accessible and it is easier to do validation. You can also use the same version control tools you use for your code.

You could use issue trackers to automatically generate e.g. release notes. 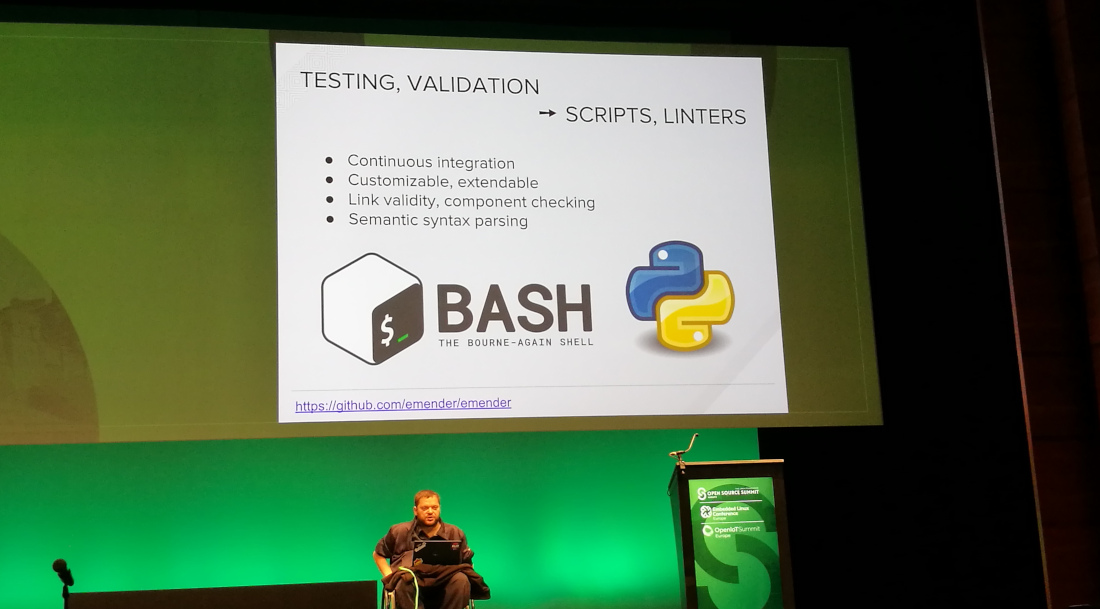 You can build and test each commit/pull request (continuous integration). You can test all kinds of things: are components indeed available, are links valid, etc.

Generating documentation is one, publishing it is another thing. You could automatically deploy your documentation (continuous deployment).

To make the barrier to entry for contributing lower, you could use a containerized toolchain. This way people can contribute without having to worry about installing all required tools on their own system.

There are challenges though. Both writers and developers may resist. Writers have to retrain and it may be a steep learning curve. Developers may feel that doing documentation properly might slow down the development process. Since the documentation is more visible now, developers might become conscious of their language and grammar skills.

There are also technical challenges. Converting to another format might not be trivial and even lead to a disruption in the release cycle. There may also be resource and staffing issues.

What are My Microservices Doing? — Juraci Paixão Kröhling (Red Hat)

A microservice is observable if we can analyze its metrics, logs and tracing information. But you need more than metrics or logs of individual containers. You want the aggregation of all of them to see what is going on and detect patterns. 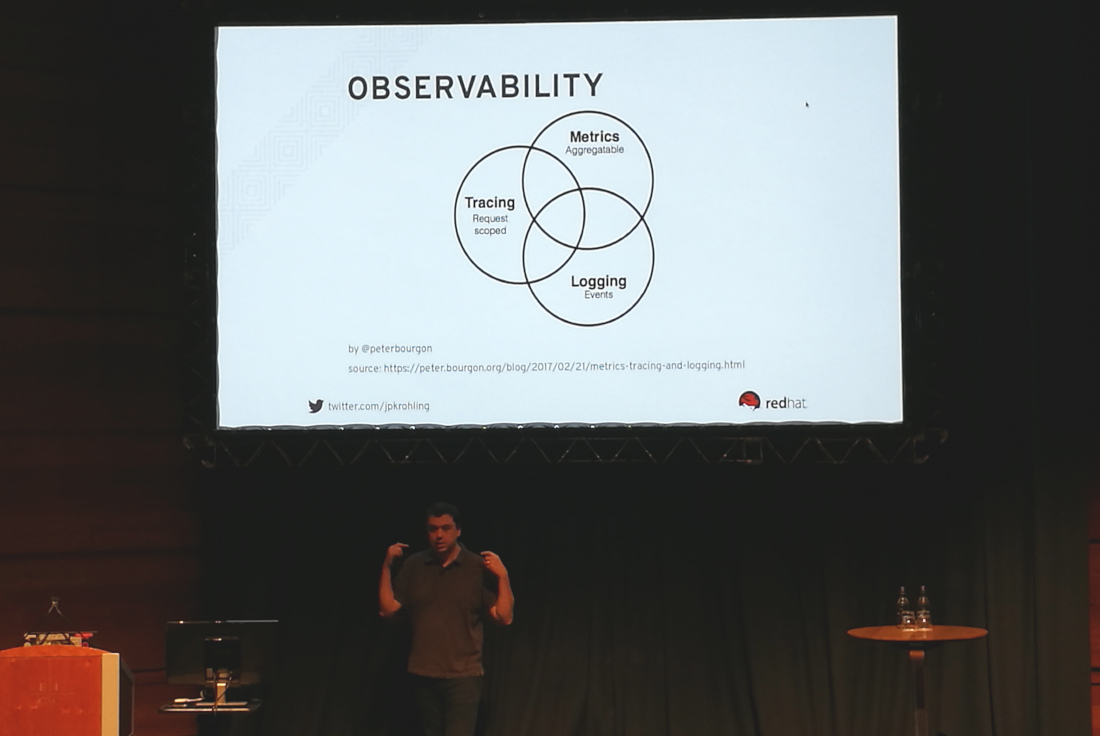 Distributed tracing tells a story of a request though our services (which services were touched, when, etc). It is especially useful when doing root cause analysis or you want to optimize performance (where am I spending most of my time).

But how does it work? A “span” is a data structure to store units of work in (what, when did it start, etc) plus metadata. Tracing includes references to other spans so you can build graphs of those spans.

The OpenTracing project wants to document terminology so we are all talking about the same things. After documenting, the next step is offering an API (which the project does for 9 languages at the moment). The result can be used in compatible projects like Zipkin and Jaeger.

Jaeger is a client side tracer that collects data. It sends it to a backend component for storage. A frontend component can then display the results. Jaeger runs on bare metal, OpenShift and Kubernetes.

Data storage for Jaeger is typically on Elasticsearch or Cassandra.

Have a look at OpenTracing API contributions GitHub organization.

Virtualization is never going to go away. 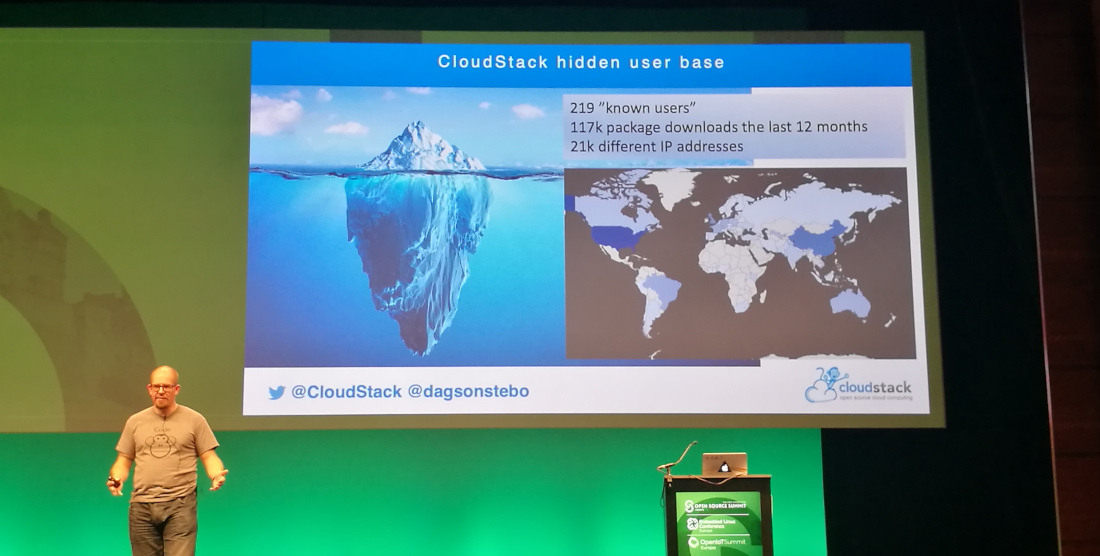 You can use CloudStack for private cloud, public cloud or a combination of both in a hybrid cloud.

What can CloudStack give you?

CloudStack can be seen as competition to OpenStack. However, CloudStack is vendor neutral. As a result it is a bit of the invisible man in the cloud infrastructure space.

It is not a cloud agnostic tool. It does however provide a single configuration language. 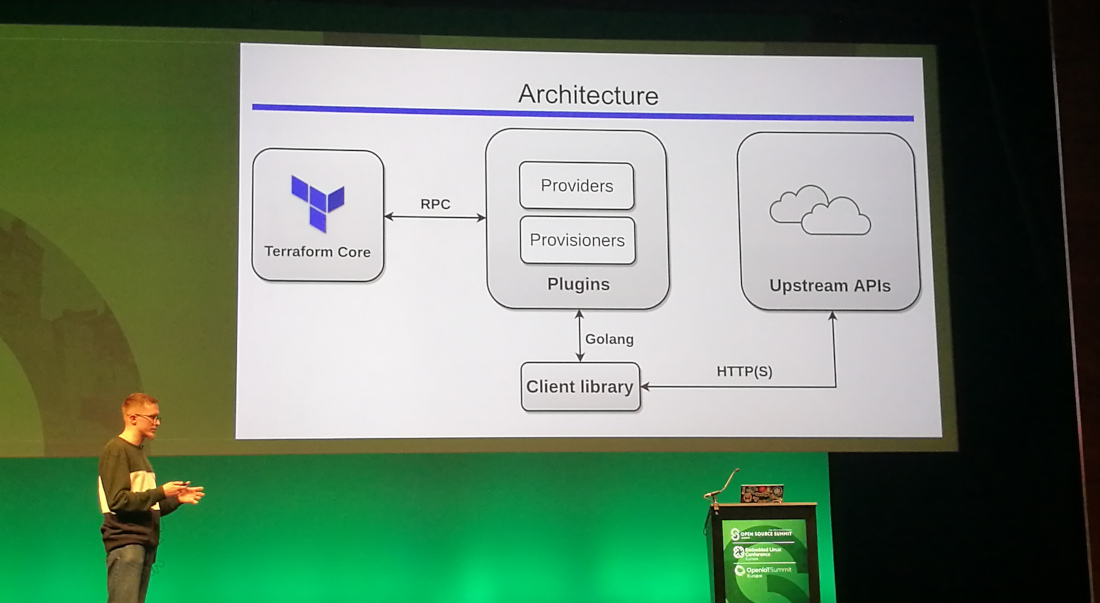 About a year ago, the Terraform Module Registry was introduced.

Chef and SaltStack are supported by Terraform; Ansible not (yet).