This year, due to the COVID-19 pandemic, the Dutch devopsdays are combined into a single day, online event.

These are my notes from the keynote sessions.

Why change matters now more than ever: the importance of DevOps in this new world — Michael Ducy

This year has challenged us in many ways. Many people got sick, many people have died. Our world has been turned upside-down. Some responses to this have been good, some bad. We’re more divided, communities have been shattered.

Are the digital possibilities we have nowadays, which have helped us in these challenging times (Netflix, order food online, etc), contributing for the good? Or do they divide the people that are fortunate enough to be able to use them and those that are not? What does digital transformation do to serve the underprivileged, the poor, the oppressed?

Be very aware that there are many people that are being oppressed. Many systems in our world are built upon the “technical debt” of not treating people as equals. We intentionally do not go into the bad neighbourhoods in our cities. We avoid them (at least in part) to not be confronted with the conditions that people from those parts of the city have to live in. We don’t want to be reminded about what we are not doing to help these people out, while enjoying our own lives.

In the DevOps community we talk about diversity and inclusion. We have the option to close a number of gaps. It is not just about the difference in pay between genders. It is also about us, privileged people, to use our voices to lift people up. We must invest in lifting up the lowest and destroy our systems of oppression that were setup hundreds of years ago.

Think about how you can use your voice to destroy systems of oppression.

There is a lot that is built into society and culture that needs to be changed. We have an opportunity to lead the change.

From waterfall to agile. Microsoft’s not-so-easy evolution into the world of DevOps — Abel Wang

The definition of DevOps used by Microsoft:

The first lesson Microsoft had to learn in their evolution from shipping a boxed software product to a service: if it hurts, don’t avoid it but do it more often. By doing it more often, you get better at it over time until eventually it stops hurting.

The way you organize your company is very important. You don’t want different teams competing with each other, you want them to collaborate, to be one company.

To support that idea Microsoft started to use one engineering system instead of allowing each team to pick their own tools. Now Microsoft is using their own tools (Azure DevOps services: Azure Boards, Azure Pipelines, etc).

To get there, dramatic changes in the team structure was needed. Previously there were basically three teams: program management, development and testing. There was a toxic culture between the development and the QA teams. QA was seen as a second class citizen.

They transitioned to an engineering team where the development and QA teams became one team: QA had to learn the codebase and the developers needed to learn how to test. Another transition they made was to create a “feature team,” which combined engineering, ops and program management. This makes it easier for customers to communicate with Microsoft since one team is responsible for one feature, instead of different teams, depending on where in the development phase a feature was at a certain time.

Engineers are allowed to pick a different team to work in each year. This makes them very happy even though only about 20% of the developers actually changes to a different team.

Another change is that every team has the same sprint cadence now. All sprints start on the same day and have the same duration (3 weeks). Sprints start with an email to the engineers and end with a summary of what has been accomplished plus a short video. At the end of every 4 sprints, all team leads (of the teams that are related to each other) have a planning meeting. Every 6 months the 12 month strategy is reviewed.

Leadership wanted to micromanage, but didn’t have enough context. Providing them the right context to make sound decisions took too much time. In the end it was decided that leadership was no longer allowed to look at the backlog and only operate at the 6-month and 12-month planning level.

The teams also introduced a new rule: if you find a bug, you have to fix it in that sprint. Teams are only allowed to carry four bugs to the new sprint. This is called the “bug cap.” If you are over this number, you are not allowed to build new features the next sprint but first have to reduce the number of open bugs. This is not meant as a punishment, but as a way to keep quality at a more stable level.

What to measure? Be very careful because people tend to want to game the system. Is code coverage important for your bonus? Be prepared to have 100% code coverage without actually improving the quality of the code. It is better to measure outcome, e.g. how much time it takes to fix a bug once found. Metrics are not used to punish or reward engineers—they are used to help the engineers and answer questions like “do you need training on the new framework?”

How do you get your developers to do the right thing? Make them feel the pain of their own code if they don’t. Make them part of the call to solve a live site incident for example.

(For the record: April also works for Microsoft and uses the same definition for DevOps as Abel.)

Why is DevOps important? Because your competition is also using it. It results in high performance companies that deploy more often, have a lower change failure rate and respond to the market faster (shorter time between commit and deployment).

We are constantly sacrificing security for speed. Things that hinder security:

Ops and dev teams don’t always have the same goals. We need to align that and own a feature together.

(Due to a technical issue the talk could not be completed as planned and April had only a few moments to wrap up.)

The main takeaway: “shift left” because most defects are introduced during the code writing phase. Address these things earlier and tackle security during development. Add security checks to your pipelines.

BizDevOps: bridging the dominant divide between business and IT — Henk van der Schuur

There shouldn’t be a divide between the business and IT. Both sides should cross over to the other side. IT needs someone from business, and business should take more ownership over tech decisions and understand what they mean. Both sides should be part of one team. It should be a partnership.

You can start a project with a “pressure cooker session” to get a good start. Such a session consists of a number of phases:

If this session ends with a “go” all disciplines should be involved: business, operations and development. 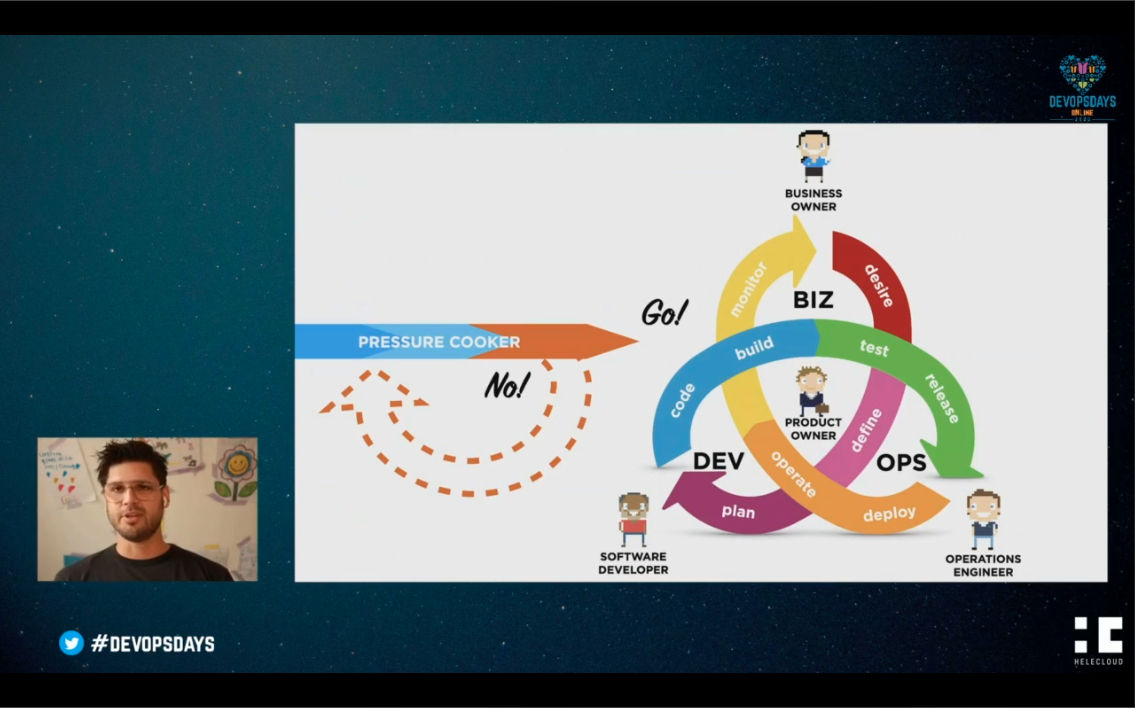 DevOps needs a sequel. Let’s repeat the trick and involve the business. Get the business, operations, developers and product owners into the same room. The business wants to get involved and wants us to realise that it’s about delivering value. Technology is everyone’s business.