Last year I participated in a deployment knowledge sharing session and I started implementing changes at my company pretty soon after. The result is that we are using Puppet for some parts of our server configuration. We also added Munin to our monitoring toolset (and I used Puppet to deploy Munin and manage its configuration). But an important piece that was still missing in our setup was an overview of which packages we use in the buildouts of our clients and more specifically which version each client uses.

Apparently I was not the only one that wanted to have such an overview: Jukka Ojaniemi created Whiskers (PyPI, GitHub) and released version 0.1 in December 2011. Whiskers is a Pyramid application and it is intended to be used in combination with the buildout extension buildout.sendpickedversions (PyPI, GitHub).

Setting up Whiskers is very simple (see the Whiskers README for details) and since the data is stored in an SQLite database there is little infrastructure needed. The buildout side is even less work, since you only have to add the following:

And the result after modifying several buildout configurations is a nice overview of which packages (and versions) are used by each buildout. 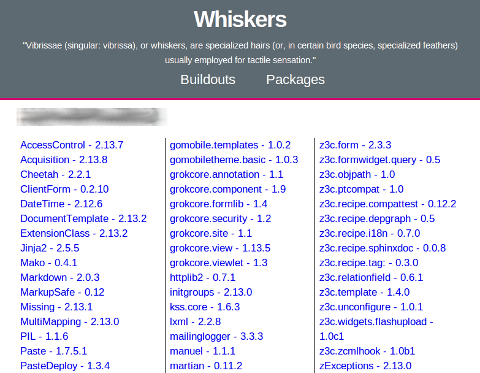 But you can also view a package and see which versions are used in which buildouts. 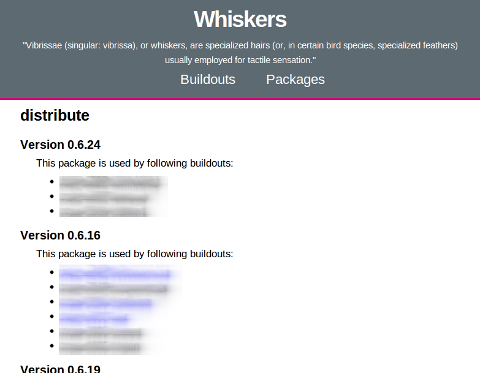 For the Edition1 Whiskers server, I wanted to change the CSS to make the header and footer match our company colors and change the used font. Perhaps Pyramid provides a solution to override static files included in a package, but I chose to copy the whiskers.css file to another directory, modify it and have Apache serve my file.

Although Whiskers may not be perfect yet, I quite like it and am happy that I finally took the time to set things up.