These are my notes of my second day at DockerCon.

Just as with yesterday’s notes, these are just notes and not summaries.

You can configure the output of the “docker ps” or “docker container ls” commands with the “--format” argument. You can also put your preference for the formatting in your ~/.docker/config.json file under the psFormat property (see the documentation on configuration files. Warning, this file also contains your passwords to Docker registries so do not put it online.

The “.” at the end of a Docker build command means that the target (the current directory in this case) is sent to the Docker Daemon as a tarball. Use the .dockerignore file to exclude large directories.

Alpine is pretty small (5MB). Couple of gotchas though, like:

If you are looking for an alternative, have a look at the Debian Slim images like debian:stretch-slim. They are (at the moment) 30MB or smaller.

If you build static binaries, you can put the binary in the scratch image. Since there is no operating system on top of the kernel, you cannot use user names. You can use IDs, USER 65534 maps to the the “nobody” user. 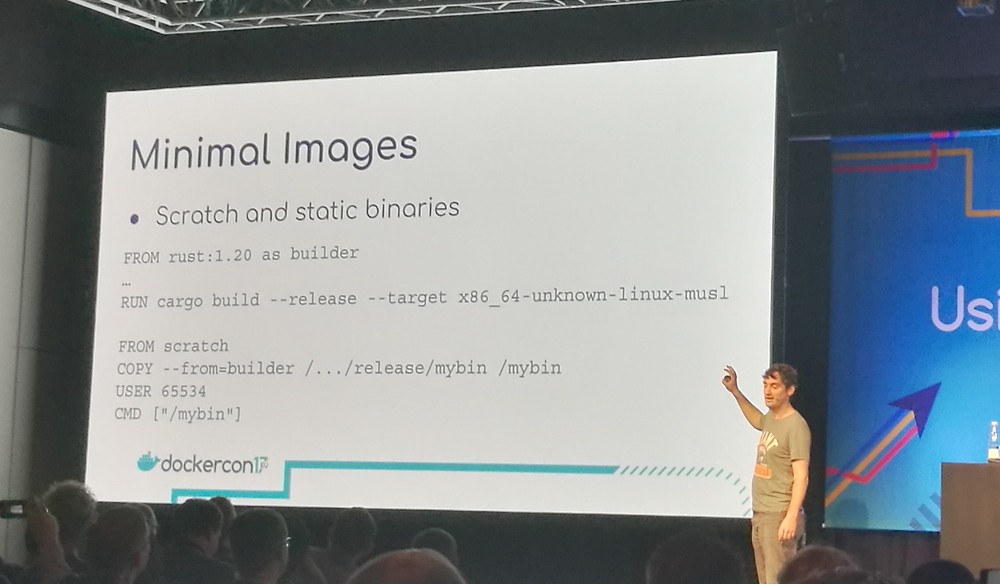 Do not require containers to start in sequence. Instead have a container wait for a service it depends on (including backoff) and include this in the application itself or in a startup script.

When Docker stops a container, it sends a SIGTERM signal, waits for 10 seconds and then hard kills the container with a SIGKILL. If the latter happens, you cannot tidy up properly (e.g. close network connections, write a final log entry, etc). So try to prevent this.

Tini, used for signal forwarding, is integrated in Docker now.

A benefit of healthchecks is that Swarm will only route to healthy containers. Note that healthchecks are run inside the container itself, not on the host. This might mean you will have to install more software in your image (e.g. curl).

To improve security, use a read-only file system by adding --read-only to the run command. Use a tmpfs mount to create writeable locations where applications can write e.g. pid files. The data written to the tmpfs mounts is kept in memory and not stored persistently on the host. 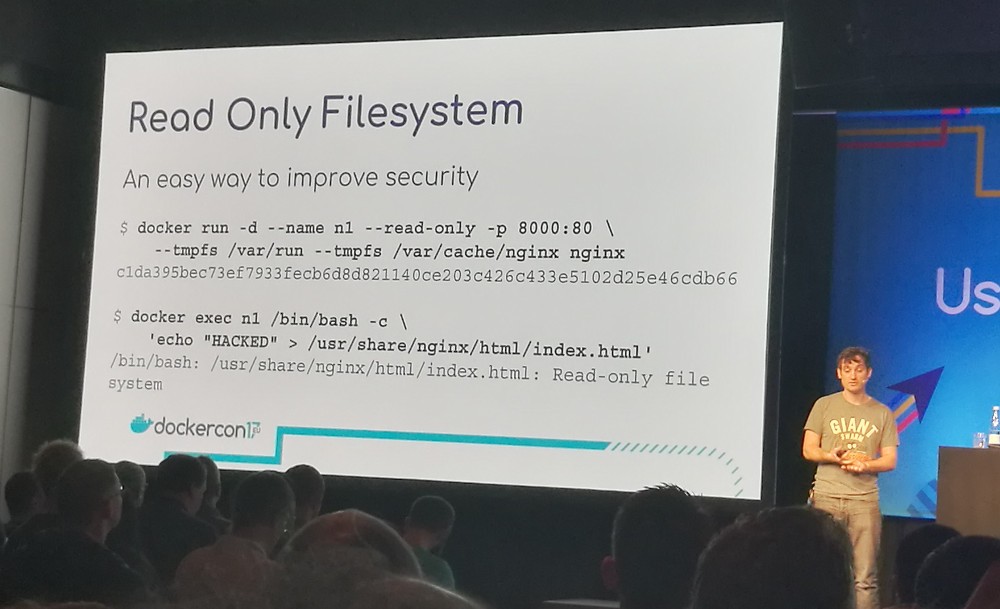 Users are not namespaced (by default). If an attacker breaks out of the container via service running as root, the attacker is also root on the host. So do not run as root! Create and set a USER in your Dockerfile or use the nobody user.

To prevent using sudo, use gosu instead.

It’s nearly always a bad idea to run Docker in Docker (issues with file systems and caching, image stores). Instead, mount the Docker socket with “-v /var/run/docker.sock:/var/run/docker.sock”. Be aware: this is a security problem because there is less isolation between the container and the host.

Alpine Linux uses the MIT licensed musl libc which has a clean, modern codebase and is lightweight. It’s small, so what is missing?

Busybox is also part of Alpine Linux. It includes most of POSIX’s shells and utilities. It’s pretty impressive how many tools are squeezed into ~800KB.

Alpine created apk-tools because the traditional package managers were not fast enough. It is faster than other package managers because it is designed to read once and write once (compared to minimal 3 reads and 2 writes).

The --no-cache option was added to the package manager specifically for Docker. It does not store cache information on disk. If you use this flag, you do not need a cleanup step (in contrast to when you are using apt).

With regards to security:

When not to use Alpine? If you:

A relatively new addition is the macvlan driver. It provides a hardware address to each container. You’ll want this if you need to connect to a VLAN network or have to deal with IPAM. It requires promiscuous mode.

The macvlan driver essentially makes a Docker container a first class citizen on the network.

You can have a separate data and control plane in your network on hosts with multiple NICs. This provides physical and logical separation of traffic.