After the workshops from yesterday, this was the first day filled with talks.

Note: these are my notes. They are not necessarily representative summaries of the talks.

Continuous improvement is part of DevOps. We improve things we want to be better, like our build pipeline. Don’t forget to also improving yourself!

The title was a way to get all the buzzwords on one slide. And they are hand-wavy enough to be able to talk about anything. ;-) 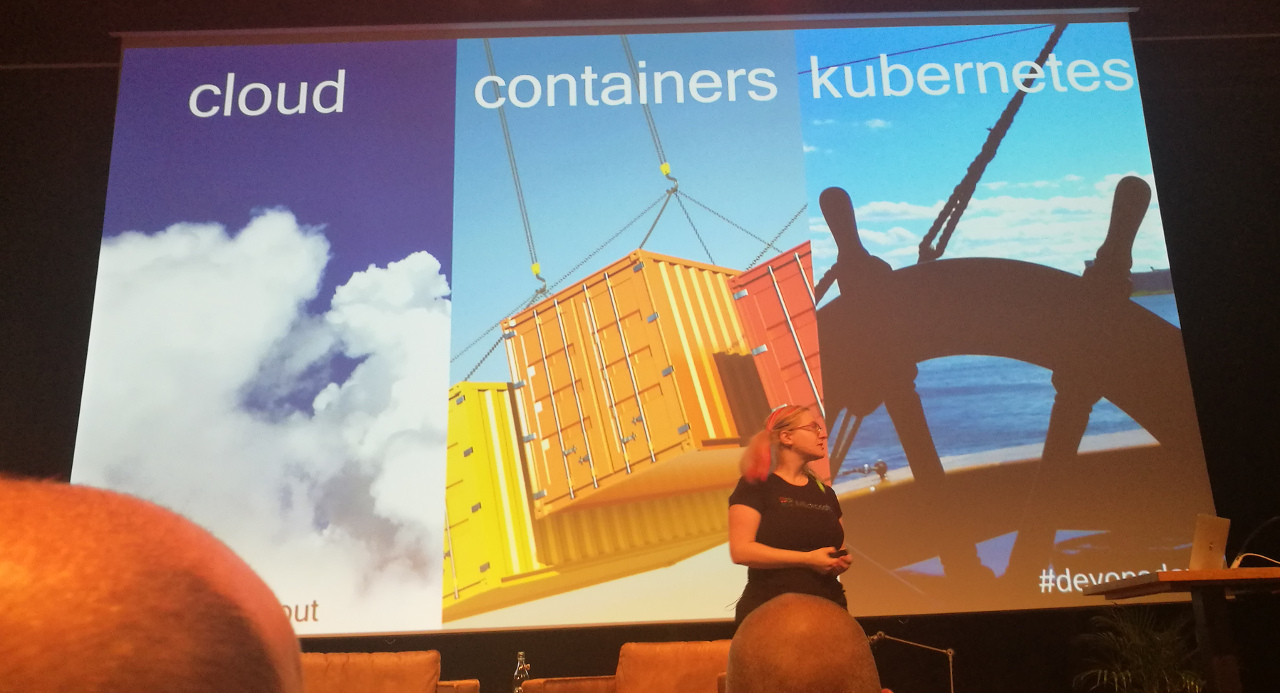 Rollbacks are a damn, dirty lie.

We can only move forward to a future state which we hope is similar to the old state.

Containers solve problems in our deployments. They make it a lot easier to ship for example. They do not magically solve all the problems you have. You get new problems, like having to update your base images.

We have had container like things in the past: chroot, FreeBSD jails, Solaris Zones and LXC. Containers have become mainstream now and are easier to use. It is exciting to talk about orchestration, service meshes and storage today. However, orchestration and such are a means to an end, they are not the goal itself.

It is hard and a lot of work to take care of your application and the layers beneath it, all the way down to the hardware. Especially given that disruption is part if daily life—you know that stuff is going to happen.

Our systems could be less complex, but there is also a lot of “résumé-driven development.” We should not add things “because.” It is very tempting to build whatever is exciting. For instance: microservices makes some things more complex, so you have to know what problems they are solving in your case and then decide if it is worth the added complexity.

If you want to use Kubernetes, be aware it also adds complexity. To learn about it, check out:

Picking the “right” things to use is a hard problem. Check out the Cloud Native Computing Foundation website and see how many projects there are! Kubernetes is the only “graduated” project, all the other projects move even faster than Kubernetes.

“Legacy” is where the customers and money live. We are not operating in a vacuum. We are working in a wider ecosystem which still matters and should be taken into consideration.

Bridget reiterates that Kubernetes is a tool, not the end game.

We can end up feeling negative. DevOps should not be sadness as a service. We should stay positive.

We, the nerds have won and we probably should not screw this up. We have the opportunity to shape reality. Which is a profound responsibility. We should make the world we are living in a world we want to live in.

Ask yourself the question “how can I enable someone in another team to spend their time better?”

Examples of when serverless is not great.

They do not hate serverless/AWS Lambda at OpsGenie, but they have had their problems.

The serverless journey of OpsGenie began in 2015 with small scale custom integration. In 2017 they started to use AWS Lambda for a production service. In 2018 they started a spin-off, Thundra, to offer observability for AWS Lambda.

Some of the problems they had (and their solutions): 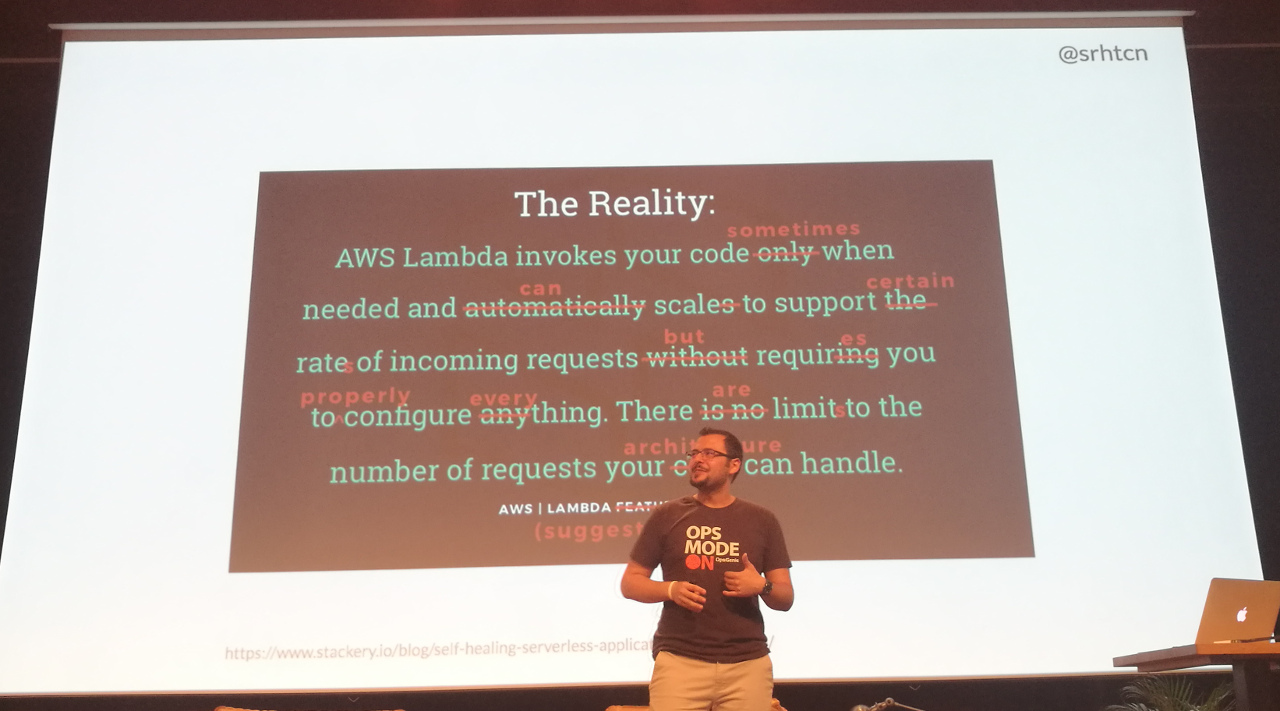 Cloud Native is structuring teams, culture and technology to utilize automation and architectures to manage complexity and unlock velocity.

Pivotal has a nice image to explain Cloud Native: 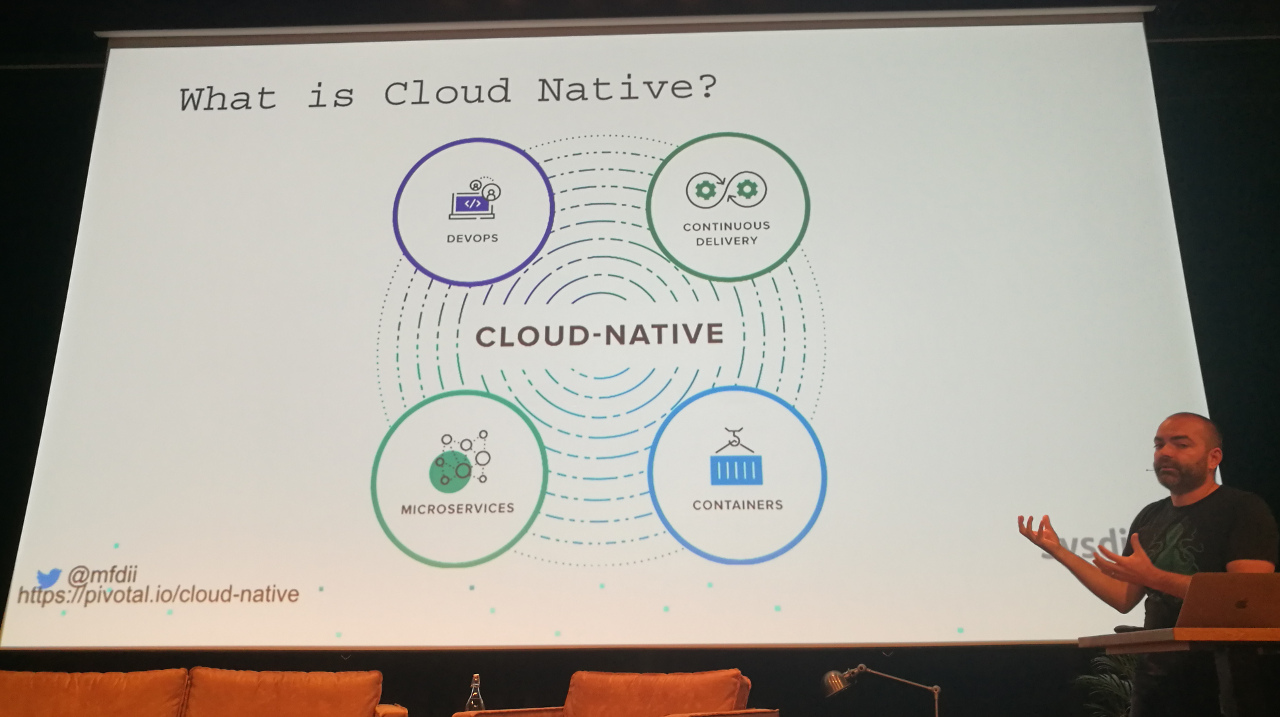 When we zoom in on the automation, measurement and lean components:

“DevOps team” is often a misnomer. What does this team do for the culture, lean, measurement and sharing aspects? Perhaps you mean the “automation team” instead? The DevOps team is often a developer services team, providing infrastructure, tooling and services.

What about Site Reliability Engineering? The Wikipedia article on SRE maps SRE on DevOps principles.

Advice: watch the video 10+ Deploys Per Day: Dev and Ops Cooperation at Flickr again if you haven’t in a while.

We used to have monoliths where multiple pieces of functionality were combined. Interaction between these components was quite easy; just a function call. We did use external components though, e.g. a load balancer and a database.

We stopped developing monoliths and started with microservices. The advantage is that we can release components independent from each other. We gained development agility. We lost on the operational side though. With microservices there are operational challenges, like discovery. Adding to this pain is a movement towards containers and a cloud environment, which means a much more dynamic environment.

Having multiple instances of a certain component means that you would probably place a load balancer in front of that component to distribute the requests. But now your load balancer has become the single point of failure. A central registry keeping track of what is running where (like Consul, ZooKeeper, etc) can help you out.

To mitigate attacks we need service segmentation. With the monolith we had three segments: the load balancer in front of the application, the monolith and the database. We used to have firewalls, virtual LANs, etc. Conceptually we are limiting the blast radius of an incident. But when you are using microservices, the story is not that simple anymore. There are still many components in a single segment. Segmentation with microservices is much harder since all components need to communicate. How do we segment these? 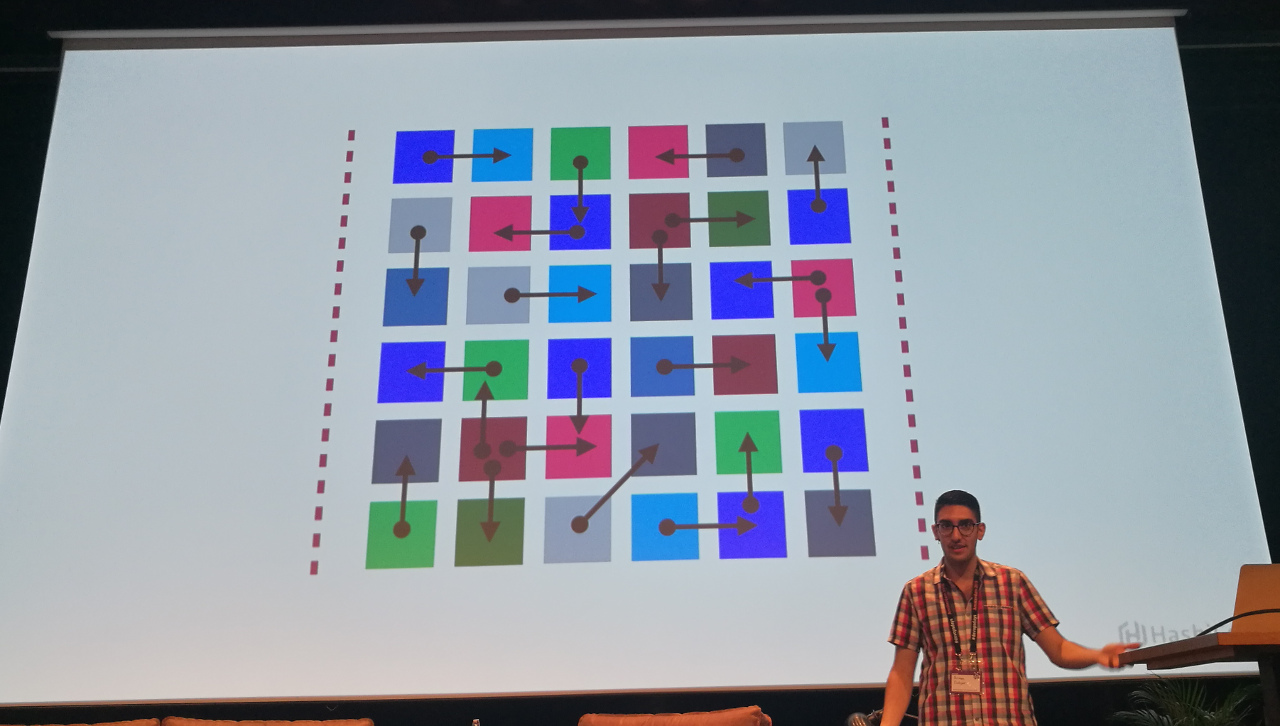 Infrastructure is a means to an end. Microservice architecture comes with a common set of challenges. Consul wants to provide common wheels for these challenges:

Consul launched in 2014 and is the oldest application from HashiCorp and the application with the biggest footprint. Consul Connect was announced earlier this week and is meant to handle the service segmentation aspect:

Consul as a control plane, pluggable proxies as data plane.

Already using Consul and want to start with Consul Connect? Upgrade to the latest version of Consul (1.2.0 at the moment) and change three lines of code on the server and the client and you are good to go.

Don’t be a bystander, be an incident commander! — Rachael Byrne (PagerDuty)

Incident commanders are the key decision makers in the response to a major incident (and can even outrank the CEO during incidents, assuming you have leadership buy-in). Technical leaders seem to be the most likely incident commanders, but this does not scale very well since there are only that many of them. 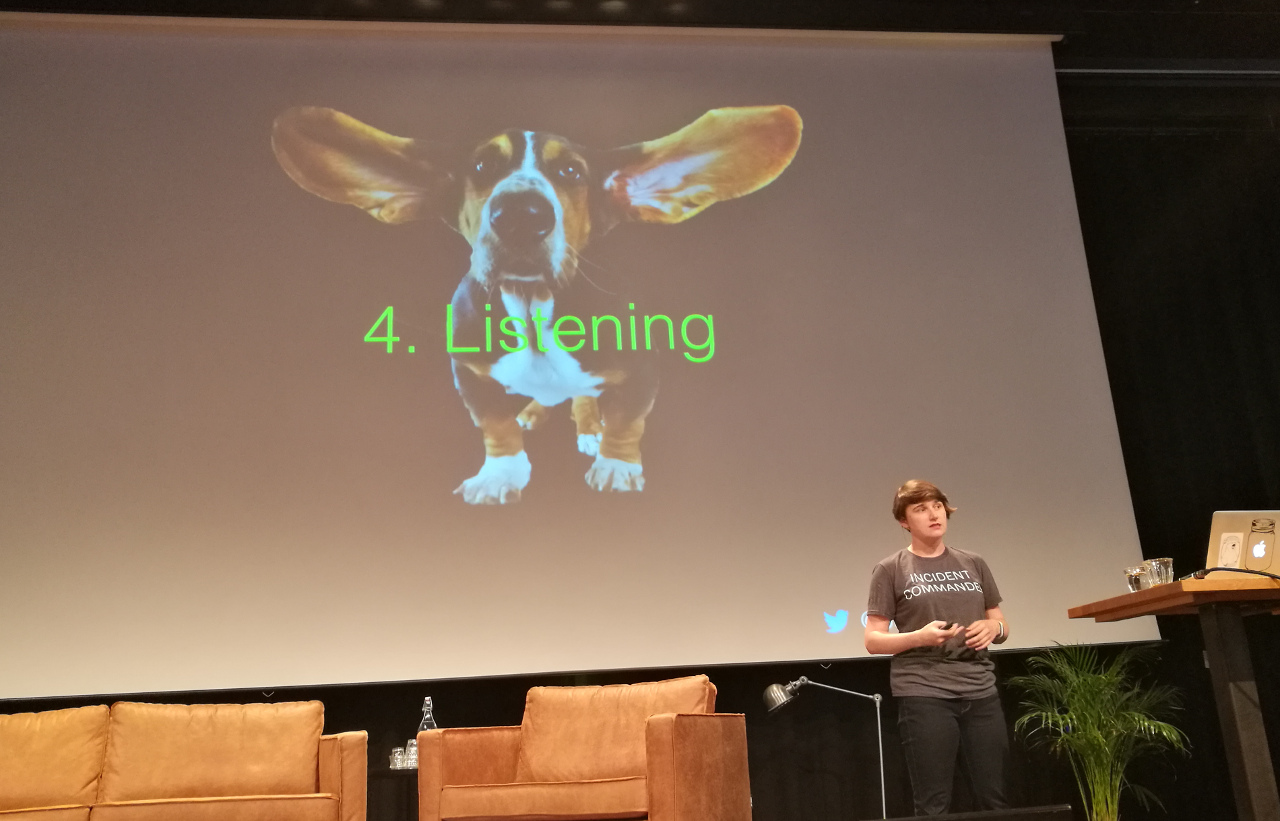 Celebrate that the trainee is now an incident commander!

DevOps is about creating empathy. Why stop at Dev and Ops and not include the whole business?

If you’ve walked around in Amsterdam you may have noticed that there are no curtains. Dutch people like their privacy, we just don’t want to block the view.

Since you write the software, you can remove the curtains from your application so you can look inside. The reason we are not doing this is because of silos: Dev does not talk to Ops and neither talks to the business people.

FEBO (known for its automat vending machines) reminds him of PaaS: fast and convenient. Dev can deploy and Ops need not be involved; everything will be fine, right?

Better service leads to better food. Ops should be a service.

In summary: get visibility, focus on services and share responsibility.

Email alerts from Jenkins have been abolished at TOPdesk. They needed something more “in your face.”

They use a build monitor for Jenkins and added a blue light which starts flashing when the build is broken. Not as easy to ignore as an email.

Matty was responsible for a devopsdays talk selection. There were 176 talk submissions for only 18 slots last year.

A mockumentary is a fake documentary, heavily improvised (3–4 page script).

You don’t know what story you are going to tell when you start with a documentary. The same goes for organizing a conference. You are dependent on the submissions. You have to read all of them and a theme and story will come out. Start with an idea but be flexible.

Rene and Geert both had an assignment: “implement a secure pipeline.”

The security officers they had to work with had a huge lists of compliancy rules. These rules are impossible to understand, implement, validate and maintain.

What usually happens is that once companies are compliant, the security level decreases over time until a next audit is near. 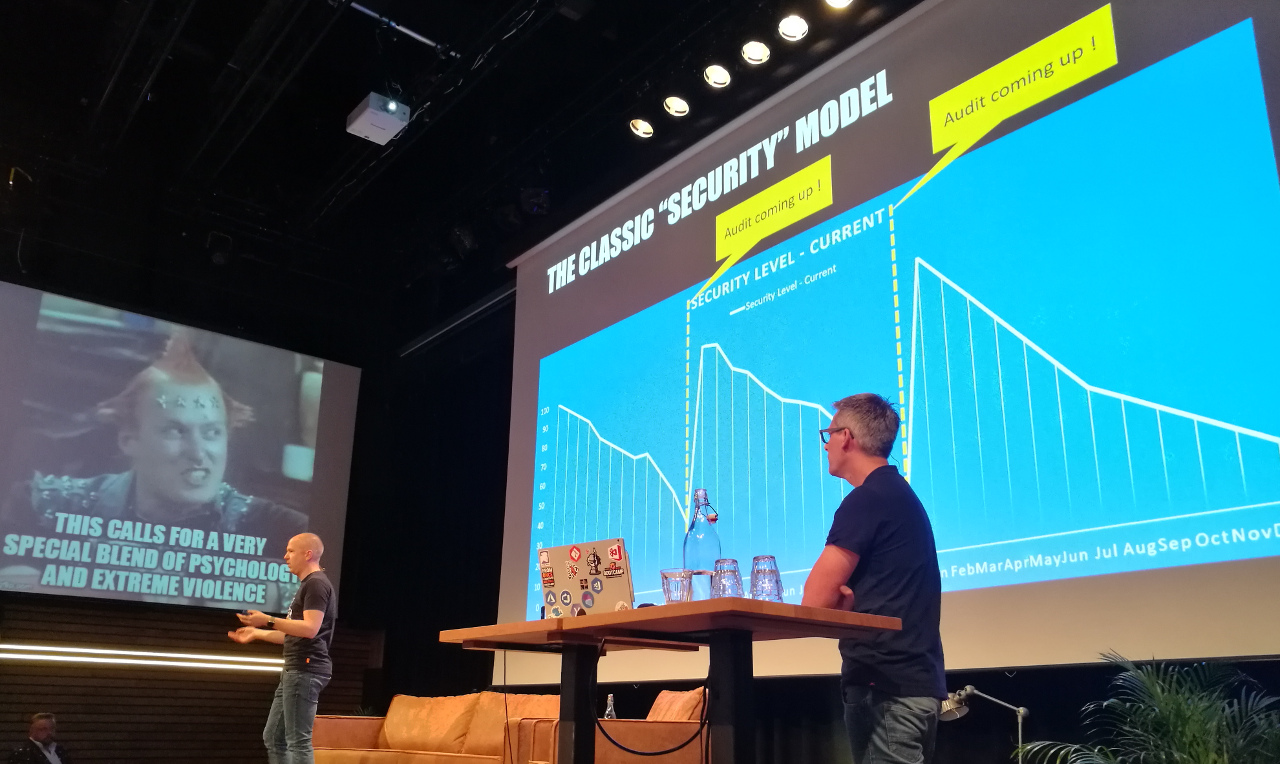 They needed a different solution. They got back to the “why” of the rules:

Compliancy is not about security. If you are secure however, you are probably also compliant.

The way we do security checking now is not sustainable if we release more than a couple of times per year. Security is the next silo that should fall.

What needs to be secure?

We need to move from a manual approach to an automated approach.

Azure has the Secure DevOps Kit. You can use these tools to perform checks and generate reports about the status.

Even when developers are just experimenting with something, you can tell them that the tools they are looking into for future use have issues that need to be addressed before going into production. This may help them with their evaluation.

Bake security into your processes. Embed it in your teams.

Security needs to be part of the continuous delivery process as early as possible.

They identified a number of risks: 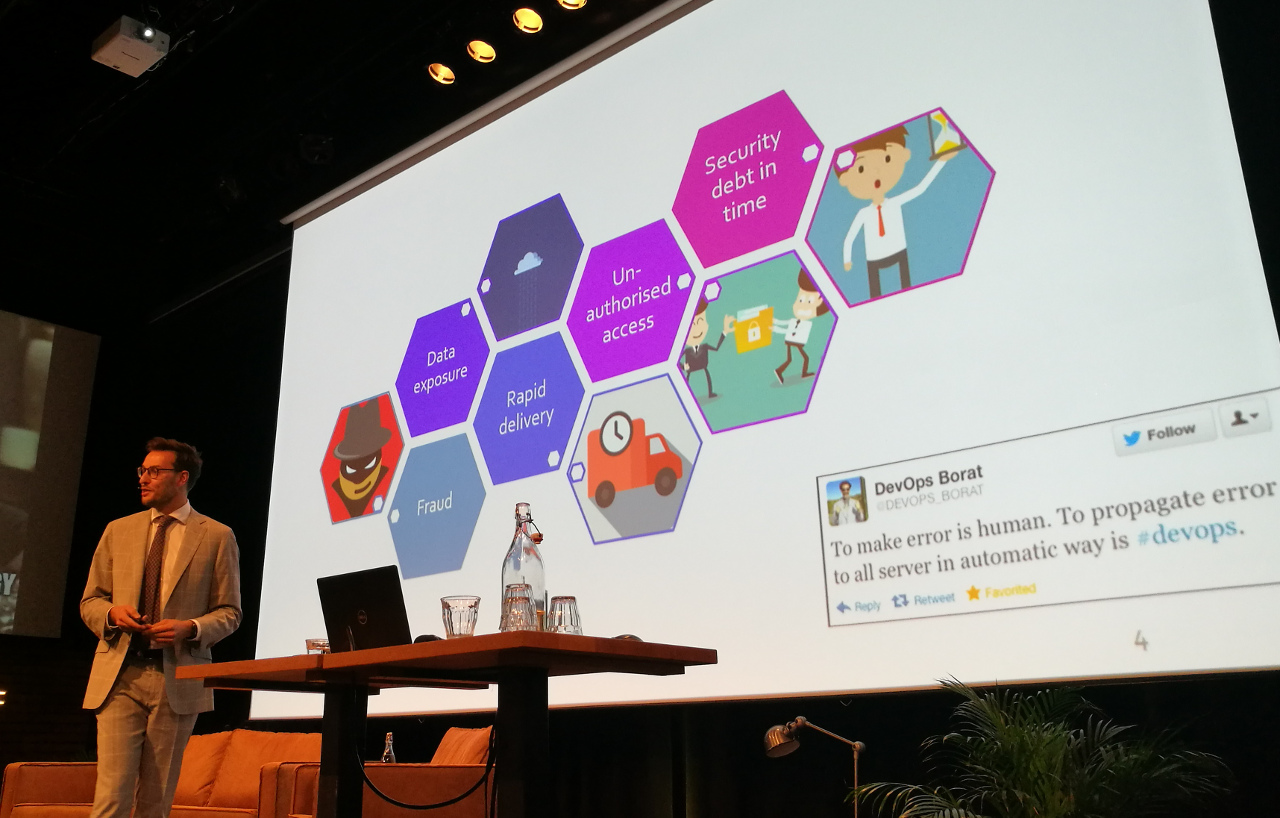 One of the key principles in DevOps is shifting responsibility back to the teams. We can do the same for security related issues.

(These principles are not new by the way—they already existed.)

The security officers asked the teams how they would apply the principles.

Security principles were geared towards implementation. The teams noticed that there were no principles for the security of the product. The security officers are now translating their requirements to business features. This makes it easier for product owners to understand what is needed and why.

Working with the teams and being available and involved from the beginning requires a different state of mind for the security officers.