Recently I changed the way this website is hosted, served and deployed. I’ll describe what I changed and why I did so.

I have used RamNode since late 2012. They have been a reliable partner throughout the years. Their support staff always responded quickly to my questions, is very friendly and willing to go the extra mile. I have been a very happy customer.

I have run this blog on a RamNode VPS since April 2013. However, my setup got outdated. I was still running Debian Jessie which also meant that most visitors could not use HTTP/2 with my website. The reason is that the OpenSSL version in Jessie did not support Application‑Layer Protocol Negotiation (ALPN). (For more information about the exact issue, see Supporting HTTP/2 for Website Visitors.)

Time to upgrade to Debian Stretch. And since the machine was provisioned using Puppet, that should have been a breeze, right? Well, sure. If not for two things:

Basically this XKCD comic all over again:

Where I previously used Vagant to test my (Puppet) code, I wanted to use Terraform now. The big advantage is that you don’t have to work on a machine similar to what you will have in real production, but you can actually use the exact same machine.

Unfortunately this also meant I could not use RamNode. They don’t offer a “pay-as-you-go” model like cloud providers do. And since I was going to work intermittently on this project, I was looking for a provider where I could create a machine, use it for however long I needed (ranging from a few minutes to a couple of hours) and then destroy it, while only paying for the time I actually used the resources.

This is where Scaleway comes into the picture. Not only do they provide on-demand compute instances, there is also a Scaleway provider for Terraform.

Their pricing is also fantastic. You can get a “development server” (DEV1-S) with 2 cores and 2GB memory for €2.99 a month. 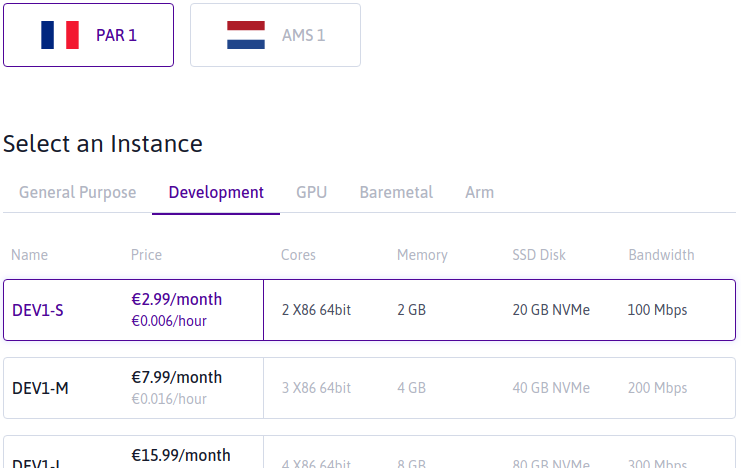 In their Amsterdam data center, you can even get a “Start server” (START1-XS) with 1 core and 1GB memory for as little as €1.99 a month. 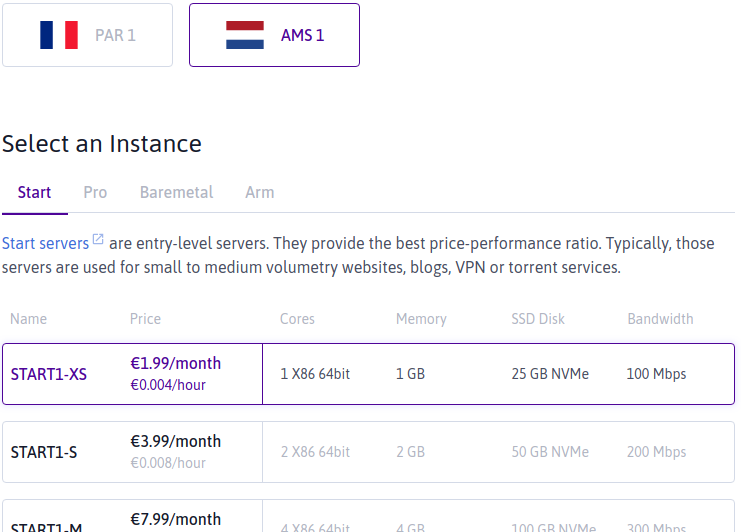 (Note that the Scaleway pricing page does not list the Amsterdam offerings so they might align these options in the future.)

For small applications (like this blog) or for experiments these are great machines. Provisioning is quick and besides compute resources, Scaleway offers a bunch of other services (like object storage and virtual firewalls).

Unfortunately I only discovered after migrating this site from RamNode to Scaleway that the Scaleway IPv6 offering is not mature enough for my taste. So I migrated back to RamNode (that is: I changed the DNS records back) and worked on plan B.

That new plan was to move to DigitalOcean (referral link). I have used DigitalOcean in the past for a few experiments and liked the experience. They provide a wide range of services, which include managed Kubernetes clusters, object storage and cloud firewalls. There is a DigitalOcean provider for Terraform and the IPv6 support seems to be what I need.

With this snippet of Terraform code:

I can configure my firewall to allow incoming traffic to port 80 and 443 from all IPv4 and IPv6 sources:

Do note that DigitalOcean Droplets are less cheap than the Scaleway servers. But I still think they provide good value for money.

With the hosting sorted out, the next piece of the puzzle is the way this website is served.

I used to have Nginx running directly on the machine and it served the static files that make up this website. And that is a perfectly fine setup, it does not have too many moving parts and deployment of a new version can be as simple as copying a bunch of files over to the machine. But…

It wasn’t very exciting to me. And to be honest, that is also part of why I run my own blog instead of using services like WordPress or Medium—I want to tinker with this stuff. (That and the fact that I want to own my own content.)

So the new setup is using Traefik as a reverse proxy. The big selling points for me are the fact that it handles the TLS certificates for me (via Let’s Encrypt, which I was already using) and that I can easily add backend services by spinning up Docker containers with the right labels.

Which is exactly what I did for this blog. It is now a Docker container with Nginx as webserver. This webserver still serves the static content that makes up this website.

In the future I might spin up additional services (I am thinking about replacing Disqus with something self hosted), and this setup should make that easier.

Note that running the services in Docker containers also means I no longer receive automatic updates via Apt of the services that are exposed to the internet (the reverse proxy and webserver). I will have to keep the Docker images I am using up-to-date myself by either building them myself or regularly pulling recent versions. On the upside: I am no longer bound to the version available in a Debian repository; I can run any version of Traefik or Nginx I like, as long as it is packaged in a Docker image.

A noticeable downside of this setup is that deploying a new version is a bit more complex. I can no longer “scp” files to the right directory. Instead I have to supply a Docker image.

Enter GitLab. Their service not only includes a Git repository, but also CI/CD and a container registry. In other words: when I push a change, GitLab can automatically build a new image for me.

And that is exactly what I have set up at the moment. When I’m finished with this article, I will:

Like I said, this is a bit more complex than before where I could copy over my static files.

Then again, that is not a completely fair comparison. Compiling the static files, generating the CSS from SASS and optimizing the images were things I had to do manually before I could copy over the files. But because those actions were triggered by a single command (“make publish”) it feels like it was less complex.

On the bright side: now GitLab is building the content it means I have clean, reproducible builds. There is no longer a risk of unfinished articles popping up in production. (Assuming I don’t accidentally commit and push them…)

Just like the last time when I switched hosting providers, I was curious about the impact of the change on the performance of this site. Especially because in the new situation Chrome can use HTTP/2 instead of falling back to HTTP/1.1.

I am monitoring my website via Uptime Robot. They can show me the response time of the monitors.

These are averages over the last 24 hours. Overall the results are comparable. The only big difference is the IPv6 times, but it looks like it was a bad day for IPv6 at RamNode as you can see in the image below. (If you exclude the spikes you are also in the 500-ish ms range.) 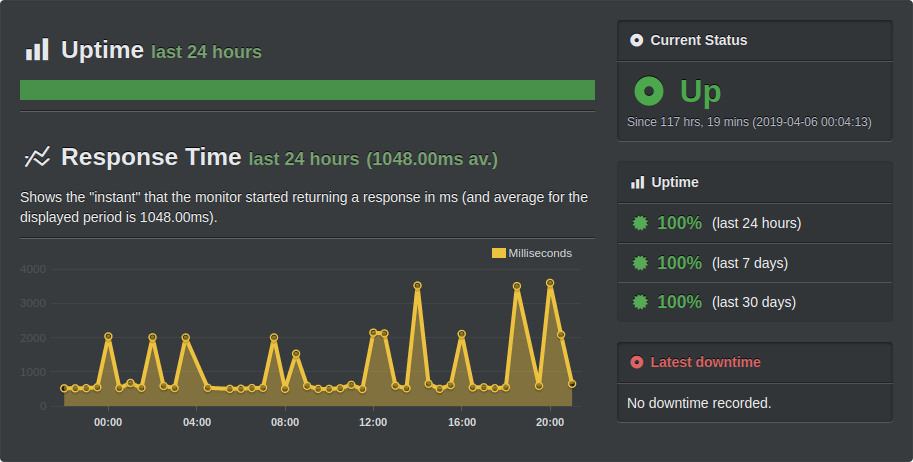 I also ran a few tests at WebPageTest. I picked a (more or less) random page, my previous post, assuming it is representative of most of the content here: a page with a few images.

In these the numbers there are no shocking differences between the old and the new setup. The new site seems to be 100–200 ms faster then the old one though, except for the load time and first interactive time on the Nexus 5 on the 3G connection.

The biggest differences are in the waterfall graphs.

You can nicely see the difference between HTTP/1.1 and HTTP/2 here. In the old setup, you can see six separate connections to my site, where the new setup only uses one.

Migrating this site has been blocking me for a while. I felt like I had to do this first before I could start working on other things. Now this is finished, I can pick up those things.

But I might also want to improve the current setup a bit more:

So plenty of fun stuff to tinker with!